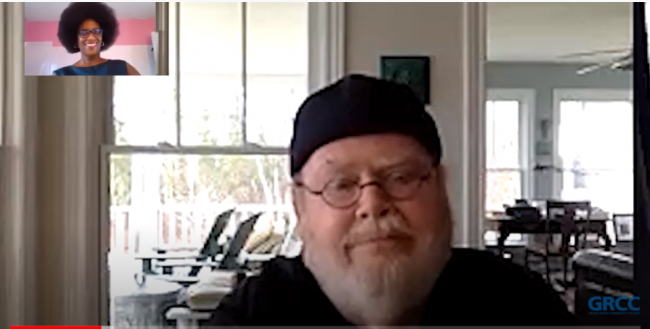 Who better to ask than Lynch himself? The award-winning poet, author – and undertaker -- joined a class discussion via Zoom and answered questions about his life and his craft.

Lynch grew up in the Detroit suburbs and took over his father's funeral home in Milford in 1974. He still works there, when not visiting his ancestral cottage in Ireland. He’s the author of five collections of poems and four books of essays.

His collection of essays, “The Undertaking: Life Studies from the Dismal Trade,” won the Heartland Prize for nonfiction, the American Book Award, and was a finalist for the National Book Award. His work has been the subject of two documentaries.

Muhammad, also an accomplished poet, said a student reached out to Lynch, and she followed up and invited him to be a virtual class guest.

For nearly an hour and 20 minutes, Lynch shared his perspective on the process of writing and finding inspiration, then listened as students read their own work to him, providing feedback and encouragement – often with humor. You can watch the session here.

“It’s nice to be among people who are beginning to sense they may want to share a voice if their own,” he told students. “I’m told by Mursalata that each of you is working on something in your own voice – poetry, a story or essay. Because I’ve committed all three of those cardinal sins, and been paid to do it, which is strange, I thought I would avail the opportunity to answer any questions you may have.”

Among his advice for beginning authors: Take a walk, alone and without headphones, every day. “The words will come to you.”

Muhammad has taught at GRCC for nearly 20 years. She’s long used innovative approaches to distance learning, making effective use of the college’s lightboard, which allows professors to record lessons while writing on a clear screen.

Muhammad served on the state Education Department’s K-12 Social Studies Standards Bias Review Committee, one of several panels that the department created in the wake of concerns raised over proposed curriculum changes.

She established The Why We Can’t Wait fund in 2009 with Kent County Sheriff’s Deputy Will Smith and Sabrina Sewell-Bragg, an administrative assistant in Greenville County, N.C., to honor family members in public service, awarding scholarships to GRCC students pursuing careers in criminal justice, education and healthcare.

Her honors include the Leadership Skills Champion Award from the Grand Rapids Area Chamber of Commerce’s Center for Community Leadership in 2013.