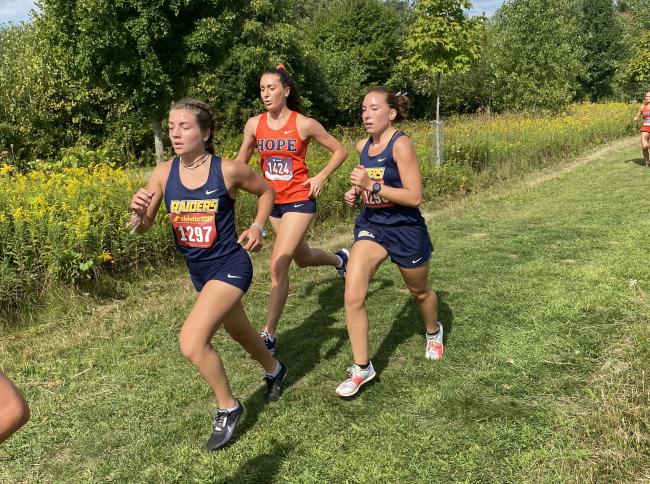 Sept. 2, 2022, GRAND RAPIDS, Mich. – The Grand Rapids Community College cross country teams struggled in their first meet of the season, but coaches said the event against four-year programs was a good learning experience.

GRCC was the only community college team competing in the 5-kilometer event, the Central Michigan University Jeff Drenth Invitational. The men's team finished in seventh place out of eight teams, and the women's team was in sixth place out of six teams in a field that included three NCAA D1 teams, two in NCAA D3, and one in the NAIA.

"I'm very pleased with the efforts of the six ladies who raced today," women’s team coach Sharon Becker said. "I'm also very pleased to have this first race under our belts. The athletes and team learned a lot through their experiences racing today. Some struggled because of the heat while others learned they can overcome and adapt through the heat. I'm fortunate to be able to coach a team that includes individuals with the integrity and determination to embrace hard work."

The cross country teams are coming off a successful 2021 season, with both finishing in the top 10 nationally and each with two runners earning All-American honors.

Men's team coach Rob Hyde said squaring off against tough competition was a good way to start the year, but the team definitely has work to do. All-American Coleman Clark was the only runner unable to compete, but freshman Mason Kohloff had a strong showing in his first collegiate meet, finishing in 32nd with a team of 16:37.

Seven other men crossed the finished line, with all but one breaking the 20-minute mark.

Sophomores Andrew Periard, 17:51, and Craig Fuller, 18:00 led the remaining GRCC runners. They finished respectably in 53rd and 57th out of 74 total runners.

Other finishers for the Raiders were sophomore Rose Meyer at 21:46; and newcomers Mariana Zaragoza, Chloe Jones and Samantha Sixberry who finished with times of 23:04, 23:22 and 23:53.

GRCC is next scheduled to compete in the Calvin Knight Invitational, which will be a 6K run for the women and 8K for the men.  That event is scheduled for Sept. 10, with the women running at 10 a.m. and the men at 11 a.m. for the men.