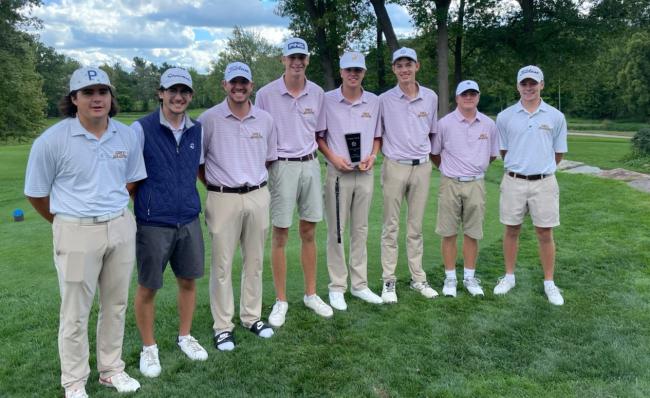 Sept. 8, 2021, WYOMING, Mich. – The 2021-22 season couldn't have gotten off to a better start for the Grand Rapids Community College men's golf team as it brought home the title in Wednesday's Aquinas College Invitational.

With a score of 307, the Raiders defeated nine other opponents, including the second-place Aquinas Saints by two strokes.

C.J. Stephan, a freshman from Rockford, led the Raiders with 73 strokes, placing him second overall in a field of 63 competitors. Davis Courtright, a redshirt freshman from Zeeland, was just one stroke behind his teammate and tied for fourth overall.  Both Stephan and Courtright each tied the leader board with four birdies.

Other scorers for the Raiders included Arie Jackman and Conner Oman, who each posted an 80, tying them for 13th overall. Ben Abare tied for 30th with an 83, while Logan Templeton shot an 86, landing him in 41st place. Redshirt freshman Matt Denhartigh fired an 88 to also land himself in the top 50.

The Raiders are next scheduled to compete in the Sam Kromer Invitational on Sept. 17. Competition is set to begin at 10 a.m. at the Elks Golf Club in Port Huron, Mich.