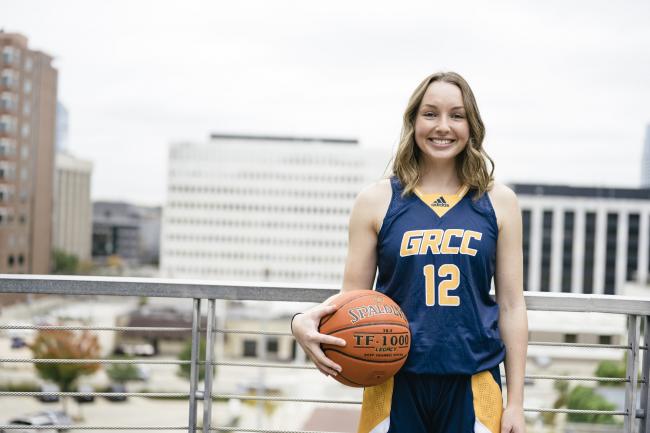 The women's team has won two games in a row and is now 3-5 on the season. The team got off to a slow start against MCC, trailing 18-4 after the first quarter and 24-16 at the half. But the team exploded in the second half, scoring 41 points and out-scoring the opposition by 17.

Defense clearly won the ball game for the Raiders. The team held the Bears to just 27.3% from the field, forcing 14 turnovers while blocking a staggering 13 shots, including six from Sally Merrill and four from Grace Lodes.

Coach David Glazier was proud of his team’s fight.

"Credit tonight goes to each kid in our locker room for never letting up, calmly going about our business, and executing the game plan," he said. "I think this group grew as a team tonight, gained a broader idea of what they can be by the end of the year."

Merrill, of Allegan, totaled eight points and 11 rebounds while Lodes, a freshman from Comstock Park, added 14 points and nine rebounds.

GRCC's men's team, now 4-6 on the season, kept pace in the first half against the No. 1 team in the country. But the second half belonged to the home team.

The Raiders trailed by just one with 2:42 left in the first half, but the Bears closed the half on a six-point run to lead 40-33.  Mott would outscore the visitors from Grand Rapids by 15 in the second half to stay perfect at 8-0 on the season.

Matthew Richards, of Byron Center, was one of three Raiders to reach double figures.  The power forward led the team with 14 points and six rebounds in 20 minutes of action.  Jovante Jones, of Saginaw, had 13 points and three assists while Andrew Moore, of Grand Rapids, dropped in 11 points and grabbed five boards.

"It was great for us to get a chance to test ourselves against the No. 1 team in the country twice in the same week," coach Joe Fox said. "We have flashes of the effort and execution that we need, but against a quality team like Mott, you need it for 40 minutes. I thought the team improved from the game Saturday, but at the end of the day you need to turn the corner and finish these games. I’m looking forward to getting back in the gym with the guys to prepare for Alpena on Saturday."

Both teams have one more game before the holiday break. They will travel to Alpena Community College on Dec. 11 for games starting at 1 p.m. and 3 p.m.