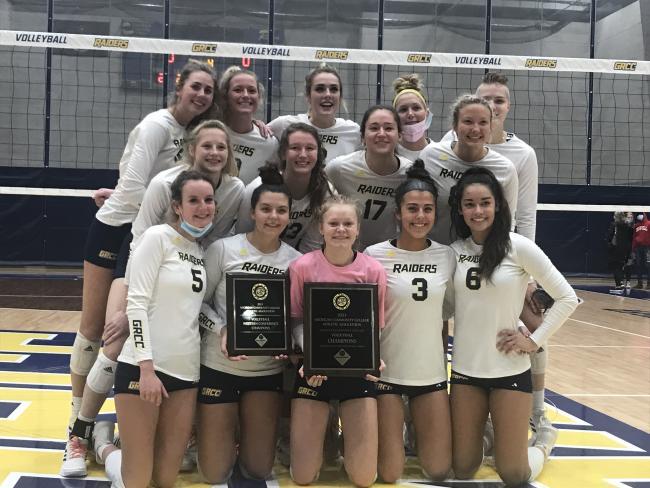 The win improves the Raiders' season record to 21-5 overall while Mott falls to 16-13. GRCC's Chip Will earned Coach of the Year honors.

Freshman Audrey Torres of Caledonia had another phenomenal match and even added a Sports Center-worthy "kick kill" to boot.

"It was an unreal moment getting the kick kill," Torres said. "I just stuck my foot out hoped for the best, but most the credit goes to our liberos, Audrey (Gower) and Ola (Nowak).  Audrey had a great pancake dig, while Ola just got enough on it to pass it to my foot. The whole team came together today and it felt great to add another championship to our program's history."

The Raiders’ first Michigan Community College Athletic Association championship was in 2010, and the team has won five of the past six titles.

Torres earned her seventh double-double of her college career with a 13-kill, 13-dig performance. She also had a career-high four blocks, including a big solo block in the second set and had a team-high four aces. Sophomore Kylie Oberlin, of Fruitport, was GRCC's most efficient attacker on the night, with 12 kills and two errors, and had the most blocks with six, including a solo of her own.

By winning the conference championship, the Raiders received a bye in next week's regional tournament in Port Huron. GRCC will face the winner of the Muskegon-Lansing match on at 8 p.m. on Nov. 4.