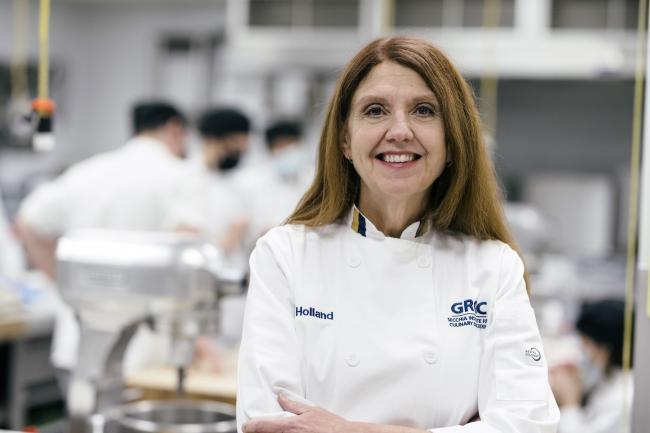 “I know he had been getting over COVID, and the first thing I said was, ‘Are you OK? How are you feeling?”

Gilchrist assured Holland he was feeling better, congratulated her on making the Dean’s List, then thanked her for allowing Gov. Gretchen Whitmer to tell Holland’s story during Wednesday’s State of the State Address.

Holland, 59, is using the Michigan Reconnect program to attend GRCC with a goal of becoming a professional baker.

Michigan Reconnect is a state scholarship program providing free in-district tuition for those ages 25 and older who don’t already have a college degree.

“We eliminated the cost barrier for 170,000 Michiganders, who are getting skills and better-paying jobs through Michigan Reconnect and Futures for Frontliners. These programs boost our economy and empower our people,” Whitmer said in the address.

“People like Caroline, a former in-home care provider, and mom of 2 who got straight As her first semester at Mott Community College. And Jodi, a Reconnect recipient—the first of 8 siblings to go to college—she’s on the dean’s list at Grand Rapids Community College. These programs have given them opportunity and opened new doors for their families. I want them to know we’re all rooting for them.”

During the Winter 2022 semester, 1,075 students at GRCC are enrolled through Michigan Reconnect, and 1,457 are attending through Future for Frontliners, which covers tuition for people who served in essential roles during the state’s COVID shutdown.

Holland, 59, said it never occurred to go to college when she was younger. Her parents didn’t discourage her, but it was not an expectation.

She enrolled at GRCC last summer and is working toward an associate degree in culinary arts with a baking and pastry arts certificate.

“Then earlier this year a friend posted something on Facebook about the Michigan Reconnect program and I knew this was a golden opportunity for me to do something I should have done a long time ago: get a college degree,” she said.

“I’m so lucky not to be racking up a bunch of student loans at my age. I’ve paid for a few books, but that’s it. Reconnect has taken care of everything else,” said Holland, who’s worked her entire life, often just earning enough money to get by and raise her three children.

But she’s not pursuing a college degree just for herself. She also hopes to inspire her 15-year-old grandson, Gavin Lietz.

“I think it’s one thing to talk to somebody and say, ‘You should do this.’ But if I can say, ‘I’ve done it. Let me walk along beside you and help you,’ that’s a lot different,” she said.

Holland says she’s grateful for the support in navigating the world of college, which can be very intimidating. Her husband, Fred, cheers her on, her oldest daughter taught her how to use Microsoft Word and her grandson taught her PowerPoint.

Because she had never been on GRCC’s campus, a young friend who’s a student showed her around, where to park, and how to find the culinary building.

“I feel like a pro now,” she said. “lt has definitely been a group effort all along.”

Last spring, Holland started getting her feet wet in the culinary arts by working full-time with her husband at an adult living facility in Spring Lake. She does all the baking and her husband, a retired chef, does all the cooking.

“We do everything from scratch, and I just love it. It’s the most wonderful job I’ve ever had,” said Holland, who also sells real estate.

Once she graduates, the Hollands dream of opening their own restaurant. And she’s thrilled Gov. Whitmer shared her story.

“Michigan Reconnect has definitely made a difference for me,” she said. “It’s given me confidence to keep going, and anything I can do to help people learn about it, I’m happy to do.”

Learn more about how the Michigan Reconnect program can help you start or restart your college education and change your life at grcc.edu/reconnect.