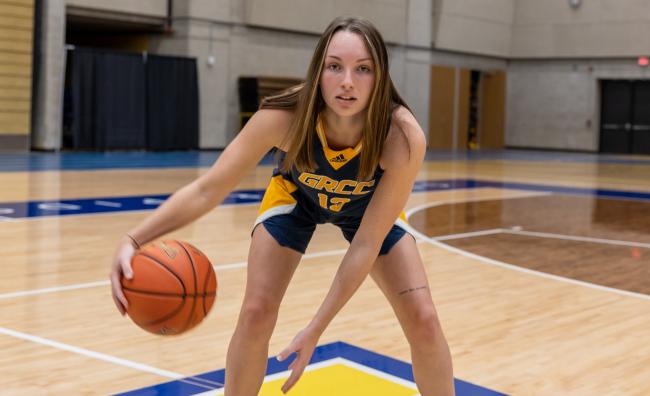 Jan. 17, 2023, GRAND RAPIDS, Mich. -- On the court and in the classroom, Grand Rapids Community College sophomore basketball player Marlene Bussler has had good people to guide her.

“Coach (David) Glazier was a big reason for my decision when I decided on GRCC,” she said. “I really enjoyed his energy, and I knew they were a competitive program.”

After coming to GRCC and playing for Glazier, she said what drew her in during the recruiting process has stayed true.

“Coach is passionate,” she said. “And I’d say he knows his players very well. He pushes us because he knows what we’re capable of.”

She has found that same energy in her on-campus classes.

“I’ve really enjoyed my professors,” she said. “It’s been a lot of work, but I’ve learned a lot too. I really enjoyed my chemistry professor, Jesse Crandall. I was very intimidated by the class at first, but his teaching style was awesome, and he was always open to questions.”

“I first started playing when I was really little,” she recalled. “My dad was my coach for a while growing up, and he was a girls varsity coach for almost 30 years (at Lakeview High School), so I trusted what he said always, and he made me the player I am today.”

At Harper Creek High School, Bussler was part of back-to-back district championship teams and was an all-conference and all-city honoree who could both hit the three and dish out eye-opening assists. Still, she wasn’t quite sure what the future might hold, either academically or athletically, until Glazier and GRCC came calling.

“I knew I wanted to continue playing basketball, so I felt like GRCC was my best option,” she said.

What she expected has come to fruition, she added.

“I’ve really liked my experience at GRCC,” she said smiling. “My teammates and professors have been awesome, and the past year-and-a-half has pushed me to be a better player.”

Glazier has also been pleased by the way things have turned out.

“The first time I saw Mar play, the way she just continued to work and give effort, it was easy to see her skill set would lead to on-the-court success,” he said. “And now I see her as an extension of myself in her role as a player because we can have conversations mid-game to correct team-wide issues or to stay consistent with the things we are doing well. And as a person she is one of the most dependable young women I have had the honor of coaching and knowing.”

A 5’6” point and shooting guard, Bussler averaged 10.5 points per game, 5.2 rebounds per game and 3.2 assists per game last year while 35 minutes per tilt. She was also second team all-conference and a player of the week honoree.

This season has been more of the same with 12.4 ppg, 4.1 rpg and 3.3 apg averages through GRCC’s first eight games.

She’s also on track to graduate in May 2023 with an Allied Health degree and after GRCC she hopes to continue playing basketball and study occupational therapy.

“GRCC has been everything I had hoped it would be,” she said.