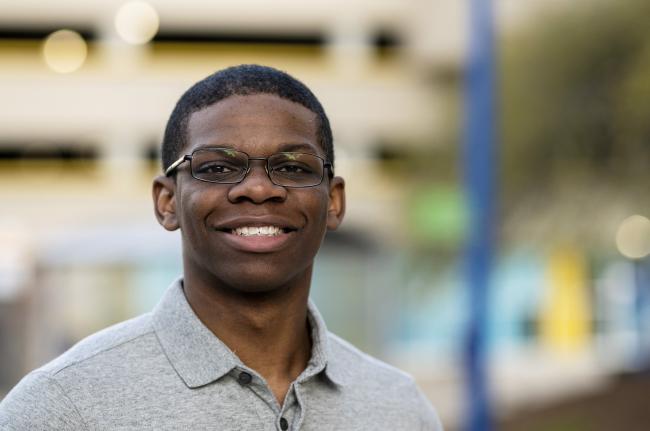 April 29, 2022, GRAND RAPIDS, Mich. -- It takes determination to start again – especially when you’ve already failed once. Sometimes it also takes extra help from supporters you didn’t even know you had.

Corey Wright spent a lot of his life moving from place to place with his mother, three sisters and three brothers. Focused on helping his family, school wasn’t really a priority for him.

“I suffered academically growing up because I did not take school very seriously, which I regret fully,” he said.

After graduating from Ottawa Hills High School, he enrolled at Arizona State University in 2018. He didn’t have a firm plan and randomly chose to follow in his father’s footsteps by majoring in electrical engineering.

“Prior to this, I had no clue what electrical engineering even was, so you can only imagine what happened once I started my classes that fall,” he said.

“It was terrible. I failed five of my classes that year – not because I could not learn the material, but because I got caught up in the wrong crowd of friends. Along with failing five of my classes that year, I also had a past-due balance of $12,000 on my student account. Combining the wrong group of people along with bad grades and a past-due balance, it caused me more harm than I could have ever imagined.”

Wright returned to Grand Rapids, disappointed in himself and mad at the world. He felt like he had failed his family and friends.

After a while, Wright decided he needed to give college another try, but this time, he was going to approach it differently. His first step: enrolling at GRCC. His next step: majoring in astronomy, a subject he was passionate about.

“Attending GRCC throughout the years has turned out to be one of the best decisions that I have ever made,” he said. “This college has shaped me into a better thinker than any other college could have done. The faculty and staff are friendly and supportive of everyone’s needs, which can make anyone feel like they’re at home.”

“This year has been academically challenging to me because I had to take multiple calculus and physics courses,” he said. “These courses have made me consider majoring in physics, but I’m still a big fan of astronomy.”

Wright, who graduates this spring with an associate degree in mathematics, has mapped out a plan to combine both his interests: After graduating from Grand Valley State University with a bachelor’s in physics, he plans to attend graduate school at Michigan State University for a degree in astrophysics.

A scholarship from the GRCC Foundation played an important role in helping Wright persevere in his second attempt at college.

“By receiving this scholarship, it has helped me to remember that there are people out there that are watching and rooting for me to make it through college,” he said.

Wright plans to eventually help students like him succeed: “I hope to accomplish this goal by becoming a professor who will be able to convey the materials of science in a way that anyone will be able to understand.”

You can have an impact on a student's life by donating to a GRCC Foundation scholarship at grcc.edu/donate.