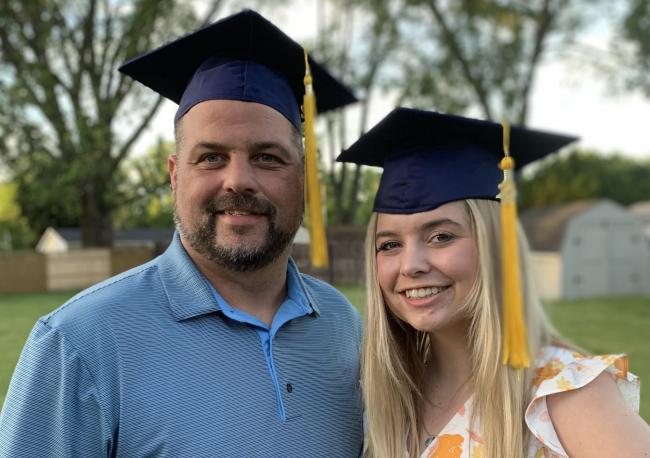 June 2, 2022, GRAND RAPIDS, Mich. -- Although Erin Windemuller and his daughter Hannah were not able to be together at GRCC’s graduation ceremonies, both said it was still a thrill to together become part of the Class of 2022.

And they did have a graduation party together, Erin said with a smile.

Graduating at the same time was a milestone neither Windemuller ever expected.

Erin first began at GRCC in 1993, fresh out of high school. He gave college a couple of years but left without completing a degree.

“I was not a very good student and did not apply myself,” he admitted.

Hannah’s path was more conventional. After her high school graduation, she too went on to GRCC where she studied marketing and completed her associate degree in the traditional fashion.

Their journeys intersected when Erin, three decades after his first attempt at college, decided it was time to finish what he’d started.

“The Futures for Frontliners scholarship enabled me to continue my education,” he said. “I was pleasantly surprised and happy to be able to receive this scholarship, and it spurred me on to finish up an associate degree.”

Futures for Frontliners is a state program that covered the cost of in-district tuition for people who worked in essential fields during the state’s COVID-19 shutdown. A similar program, Michigan Reconnect, is available for residents age 25 and older who have not completed a college degree. Additional information is available at grcc.edu/reconnect.

In 2018 he returned to GRCC to pursue his associate in Applied Science HVACR, setting up the scenario in which he and Hannah could both become GRCC degree holders in ‘22.

“I had a job in the property maintenance field and saw the value in earning a degree in HVACR,” Erin recalled. “It also was important for me to finish what I had started in 1993. I wanted to prove to myself – and with the encouragement of my family – that I could finish with a degree.”

It was a thrill, Erin said, to finish the degree and to cross the stage and celebrate that accomplishment.

“It had been 29 years since I had walked across a stage to receive a diploma,” he said. “My wife and kids pushed me to do it. I was hesitant being an older student, but they told me that I had worked hard for it, and it will be an encouragement to the younger graduates that you are never too old.”

One of those younger graduates, Hannah, fully agreed.

“Graduating at the same time as my dad was such an honor,” she said. “Watching him work on his homework and encourage me at the same time was such a blessing. Knowing that we were in this together helped both of us continue to work hard at our schooling and try our best. I’ve watched my dad consistently work hard his whole life. I’m very proud of my dad and everything he has accomplished. I know he will continue to use this knowledge the rest of his life and will also keep gaining more.”

Such words mean a lot to Erin. The GRCC degree is important to him, and he knows it will have a positive impact on his future and his career.

But he also said the impact of finishing what he started extends to the next generation, and that means the world to him.

“The impact of you can accomplish whatever you set your mind to,” he said simply. “Learning is not just for the young. It is a lifelong journey. That is how we grow and evolve.”

Hannah has fully absorbed her dad’s mentoring and modeling over the years.

Recalling her GRCC career, she said: “I’m always looking for a challenge and ways to further my knowledge. Going to GRCC was a great way to do this. In my experience when you learn something new, you just want to keep learning. This momentum of learning has given me a new confidence.”