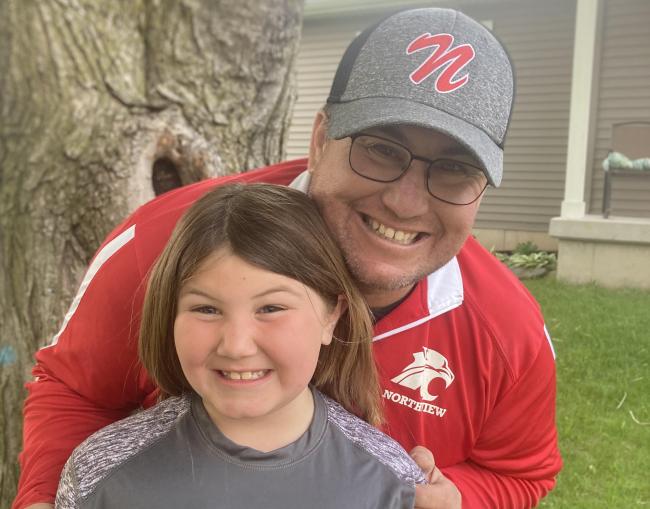 May 26, 2022, GRAND RAPIDS, Mich. -- What does the Futures for Frontliners scholarship mean to GRCC graduate Jason Reckner?

Well, there’s his recently completed degree in Tooling and Manufacturing for one. He said without the scholarship he probably would not have finished that degree.

There’s also the work he was doing as an HVAC technician for a local hospital. That work was definitely made better by his GRCC degree, he said.

And, oh yeah, there’s that new job he just took.

That position, which came with a nice raise, will see him doing maintenance, repairs and diagnostics on injected plastic mold machines, including being directly involved with installing and setting up the latest expansion of his new employer, West Contract Manufacturing, a subsidiary of Pennsylvania-based West Pharmaceutical Services.

That job, he said, would not have happened without his GRCC degree.

“I have always been very mechanically inclined, a problem solver,” he said. “But I would never have gotten this interview, let alone the actual job, without having my degree. Yay for Futures for Frontliners!”

Futures for Frontliners is a state program that covered the cost of in-district tuition for people who worked in essential fields during the state’s COVID-19 shutdown. A similar program, Michigan Reconnect, is available for residents age 25 and older who have not completed a college degree. Additional information is available at grcc.edu/reconnect.

Futures for Frontliners, he added, was critical in that it removed the largest obstacle that previously had stood in his way: money.

“I was motivated when I saw a chance to open my possibilities with this scholarship,” he said.

And he admitted he had a little extra motivation at home.

“I also felt it was very important that my daughters see me graduate and be a part of the hard work it took to get it all done,” he said.

Those daughters have seen him for the past few years as Coach Jason, a dedicated softball and basketball coach for their teams in Northview Little League and elsewhere. They now can also see him as a college graduate, and that brings a smile to his face as he talks about it.

“For them to see what happens when you’re given an opportunity, and that if you meet that opportunity with hard work and dedication you can flourish, is pretty special,” he said.

Jason first started taking classes at GRCC in 2009, transferring in credits he had earned during a short stint at Defiance College after his 1992 high school graduation. A graduate of Morenci Public Schools, he headed to Defiance to play baseball but ended up on academic probation after, he said, spending too much time on baseball and not enough on academics.

He soon slid into a career in construction.

“It was what I grew up with and felt comfortable with,” he said, “but I was never really pushing my limits or excelling in other areas.”

He got married in 2008, and they began their family in 2010 which put a halt to his first return to the classroom.

But, as his daughters got older, Jason felt more and more of a push to finish the degree he had begun almost three decades earlier.

When the Futures for Frontliners program was announced there were no reasons not to make it work he said.

“Education is very important, but it is very hard to validate a degree that you are not completely sure will pay off,” he said simply. “This program was a way to have no excuses to make it happen.”