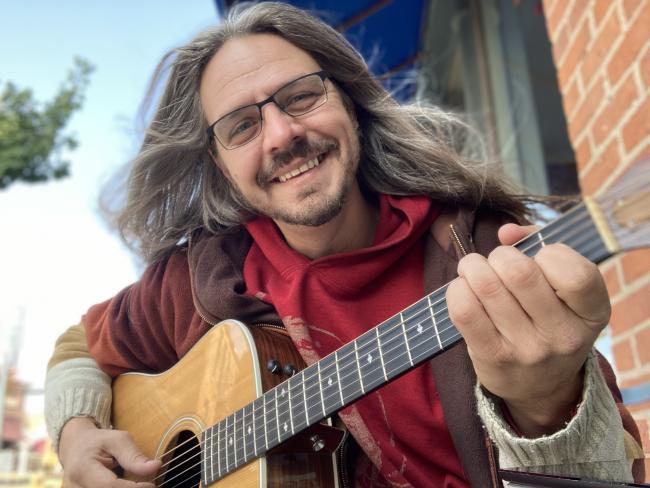 Now 41, the lifelong musician is back at Grand Rapids Community College studying business and marketing – and pulling straight As.

“I realized I knew how to be a musician. But now I’m focusing on the business of being a musician and taking some ownership in it all,” he said.

Although Thomasma always wanted a college degree, he never imagined it possible until Michigan Reconnect. Launched nearly one year ago, the state scholarship program removes cost as a barrier by providing free in-district tuition for those 25 and older who don’t already have a college degree.

“The day the state announced the Michigan Reconnect program I thought, ‘I am going to do that!’ I was just thrilled,” he said.

The scholarships are changing lives of people like Thomasma across the state. At GRCC, 1,443 students enrolled through Michigan Reconnect for the Winter 2022 semester.

"Many of our students and others in our community are experiencing financial difficulties during the pandemic. Reconnect has removed tuition as an obstacle to getting a quality GRCC education," President Bill Pink said last year when the program was announced.

Thomasma worked much of his adult life singing solo or with his band, Nicholas James and The Bandwagon, at music festivals and breweries in West Michigan and across the state. But the pandemic put a screeching halt to public performances.

“I generally would play three to five nights a week. But there just aren’t a lot of gigs available right now,” he said. “So this was really the perfect time for me to go back to college. My goal is to complete my associate degree in two years.”

And how are classes going?

“I’ve always been a good test-taker, but I would struggle at homework and sitting still and paying attention in class,” said Thomasma, a 1998 Kenowa Hills High School graduate. “But I don’t struggle anymore. It’s a lot easier to pay attention, sit still and focus now as an adult.”

The biggest challenge, he said, was adjusting to 21st Century classroom technology.

“Blackboard and all these online tools and portals you have to navigate now didn’t exist when I was in college before,” he said. “It took a while to get used to them, but I’ve got the hang of it now.”

Rather than feel embarrassed about college at his age, Thomasma is proud to often be one of the oldest students in classes.

“Because of my age, I have a certain level of confidence in myself. I'm happy about where I am and what I'm doing,” he said.

Additional information about the Michigan Reconnect program is available at grcc.edu/reconnect, by emailing reconnect@grcc.edu or by calling (616) 234-3366.

This story was reported by Beth McKenna for GRCC.