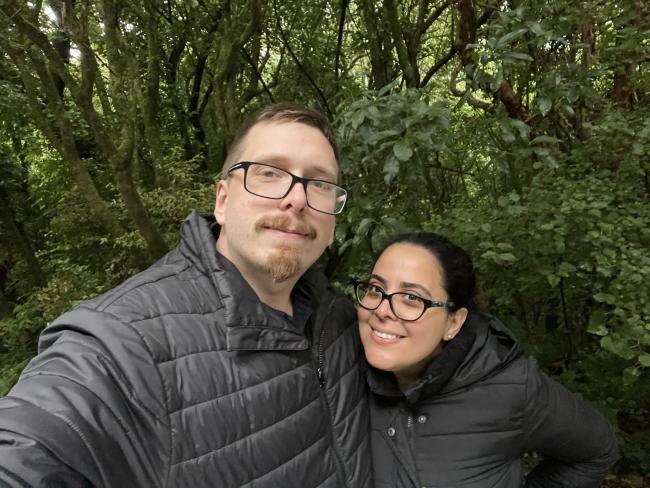 “A couple years ago, I started my travels to explore the world and ended up here in New Zealand,” said Langrick, who is originally from Fremont. “While here, I met my loving fiancée, who I'll be marrying in the next month or so, and I've stuck around with her while she finishes the last steps of her Ph.D. and she should actually be done in about 10 days.”

GRCC has for years offered online classes, but dramatically increased hybrid, and virtual real-time classes this year because of the pandemic. The formats have been helpful for students scheduling classes around their home and work responsibilities – or those completing their degrees from the other side of the world.

New Zealand is located in the southwestern Pacific Ocean about 1,200 miles southeast of Australia.

All but one of Langrick’s GRCC classes are traditional online courses, which means they have no set meeting times. His Honors Program capstone course is the exception: a hybrid class that does require attendance at a set class time.

For a while, that put Langrick in the virtual classroom at 1:45 a.m. New Zealand Standard Time.

“The professor for that class, Leigh Kleinert, has been beyond helpful in making it work for me through recording classes and letting me attend only the ones that my attendance was absolutely required at,” he said. “Also, the group I’m working with has been great and scheduled our group meetings on the weekends at a time that it doesn’t kill me to show up.”

But the extra-early morning class still called for commitment from Langrick, especially when he had to work the next day.

“Now with daylight savings time having happened both here and there, it’ll be at 11:45 p.m., which is much more manageable,” he said.

Langrick said New Zealand time fluctuates between a 16- and 18-hour difference depending on daylight savings time, which occurs on different dates.

“Our clocks just changed actually so we are at a 16-hour difference,” he said. “Basically, take the time you have there, minus 8 hours and add a day to get the time it is here.”

Kleinert says she’s been impressed with how well Langrick has done with her class.

“He contacted me about a month before the semester began to see if completing the course with me was even feasible,” she said. “He explained his situation and wondered if I was willing to work with him and what we could work out. I was impressed by that right away.”

Kleinert said she went through the schedule and identified the 10 most important classes for Langrick to attend in person – so he could engage in discussions -- and agreed to record other course sessions and post them on Blackboard.

“This has worked wonderfully and he has kept up his side of the work,” she said. “In addition, this course requires that students form an interdisciplinary team and solve a community problem. I have been most impressed that Ryan has been meeting weekly with his team members on Saturdays.”

Langrick is scheduled to earn his associate degree in computer science this spring – and tie the knot with fiancé Ellie Torbati.