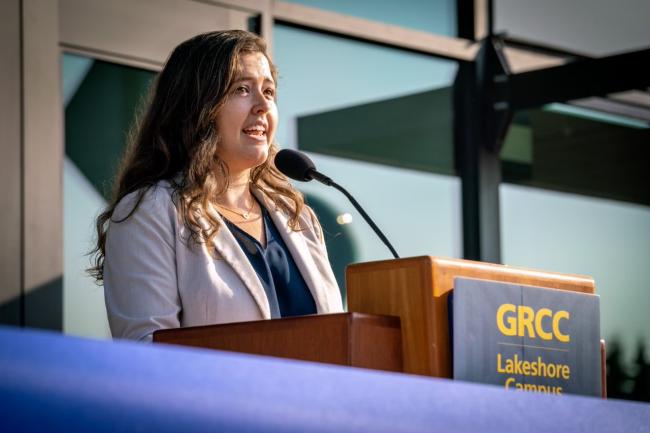 Sivertson spoke at Thursday’s ribbon-cutting, celebrating the opening of the new campus in the former JCPenney department store in The Shops at Westshore mall.

The 52,00-square-foot building is a consolidated Lakeshore presence for GRCC, with both credit and career-focused certificate classes under one roof. Located on a bus line and in the heart of a growing Holland Township community, the campus presents an opportunity to make a quality, affordable GRCC education more accessible.

"You have chosen to take this empty mall that once stood as a representation of failure and repurposed it with promise and meaning and hope. And in doing that, you have vocalized your belief that people like me can do the same," she said.

“As I look at this new Lakeshore Campus, I see opportunity for Ottawa County students like me to drive 10 rather than 35 minutes to class. Isee accessibility for those who get off work at 5 p.m. -- they’ll be able to make it to a 5:30 class with time to spare. Most importantly, I see hope. I see a community that believes in its residents, even those who, for a long time, have felt stuck.”

Sivertson used to be stuck.

She loved school and reading, and even dreamed of someday becoming a teacher. But her life changed at age 14 when her mother died of cancer.

“I had two younger siblings who were suddenly looking to me as a mother substitute,” she said. “I didn’t stop to think that I might not be mature enough to step up to the task of parenting, and for sure I didn’t know how much parenting I still needed. At school, my grades swan-dived. I began to skip classes. My career dreams faded. I saw them as a relic of a life that had been taken from me.”

She went to college but emerged with bad grades and big debt.

"I felt as useless as an empty mall, locked into living beneath my potential," she said.

Sivertson entered the workforce. A series of evening and receptionist jobs eventually led to a full-time administrative position at Lakeshore Advantage, an organization fostering economic development in Ottawa and Allegan counties. She was surrounded by colleagues and supervisors who wanted more for her.

“Growth was really the only option,” Sivertson said. “So, I looked around and found some mature people of faith. I asked them to be my mentors. And you know what they suggested? ‘Kelsey, go back to school.’”

She paid off her remaining student loans and enrolled at GRCC.

“I tried again, one class at a time, one semester at a time,” she said. “It was slow. It was gradual. But today, what were once failures and incompletes are now As. Each class has taught me confidence. Each class has introduced me to a growing community of professors and guidance counselors who are eager to help people succeed.”

Sivertson’s return to higher education was challenging as she continues to work full time. She had to set priorities with both her time and budget. But it was worth it: She is now less than a year away from graduating with her degree in pre-English literature and, at age 30, is back to believing that she can accomplish whatever goal she pursues.

“Until we breathe our last breath, it’s never too late to do what we have been called to do,” she said.