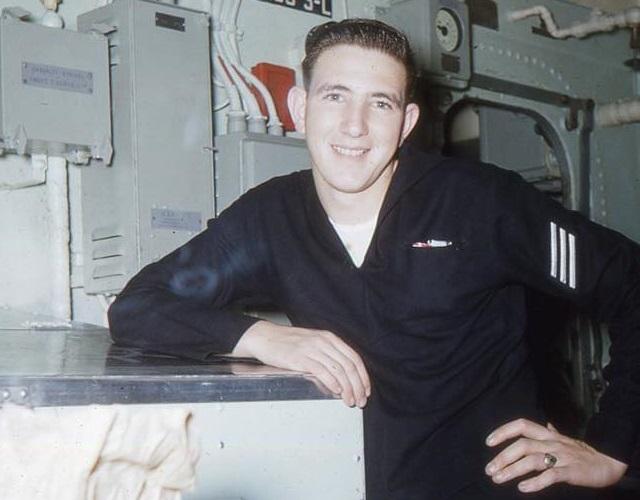 “For the rest of my days, the sound of that 21-gun salute and the trumpeter playing taps at Arlington National Cemetery will never leave me,” DelRaso said. “It was the ultimate honor paid to my father, who bravely served our nation for 22 years in the Navy.”

DelRaso shared the story of her father’s military service in honor of Veterans Day, observed annually on Nov. 11 as a tribute to military veterans who have served in the U.S. Armed Forces.

DelRaso started at GRCC in 2004 as a student tutor and is now the Wisner-Bottrall Applied Technology Center Tutorial and Open Computer Lab coordinator.

Her father, Robert DelRaso, came from a large Italian family in Grand Rapids. He joined the Navy after graduating from Catholic Central High School in 1958 and later married his long-distance sweetheart, Gladys McCarthy. Throughout his 22 years as a Navy electronics technician, his wife and three children accompanied him wherever his military service sent him.

“We spent a lot of time all over the East Coast, but also lived nearly four years in Morocco when I was a child,” Sue DelRaso said. “What an amazing experience. I’m told I could speak fluent French-Arabic when I was 3 years old.”

DelRaso said she loved her childhood and the way her entire family supported her father in his service.

“I’ve had people ask me if I hated moving around my whole life. For me, it was an adventure – and my family was closer because of it,” she said. “My dad gave a lot for his country, he taught others what he knew, and he was proud of what he did.

“He instilled that pride and love of country in all of us.”

After retiring from the Navy in September 1981 as a senior chief, he taught electronics for a few years and then worked for the city of Grand Rapids in the traffic safety department until his 2002 retirement. In 2019, he died from Parkinson’s disease. The burial of both her parents at Arlington National Cemetery was delayed until Sept. 2, 2021, because of COVID-19 restrictions.

This Veterans Day, DelRaso hopes more Americans think about the sacrifices made by our armed forces – and the families who love them.

“If you even take just five minutes, I’d like you to think about all the men and women who fight for each and every one of us,” she said.

GRCC will hold a Veterans Day observance at 11 a.m. Nov. 11 at the Veterans Memorial on the Dr. Juan R. Olivarez Student Plaza. An open house will follow at the new Veterans Center, on the floor G2 of Raleigh J. Finkelstein Hall, 143 Bostwick Ave. NE.

The center will serve as a single point of contact, connecting veterans with campus resources, including financial aid, advising and disability support. The project also will expand GRCC's partnerships with state and local veteran's agencies, helping students access benefits and support in the community.

The center will help with outreach efforts, making veterans in the community aware of opportunities at GRCC to earn credits for degrees or transfer and in-demand career skills. It will host workshops and speakers, and provide opportunities for networking and social events for the students.

The center will include peer advising through a new Veteran2Veteran program, which provides peer support, outreach, and resources for student veterans through Peer Advisors for Veteran Education, including veterans supporting each other through the transition to college.

Photograph courtesy of the DelRaso family. This story was reported and written by Beth McKenna for GRCC.