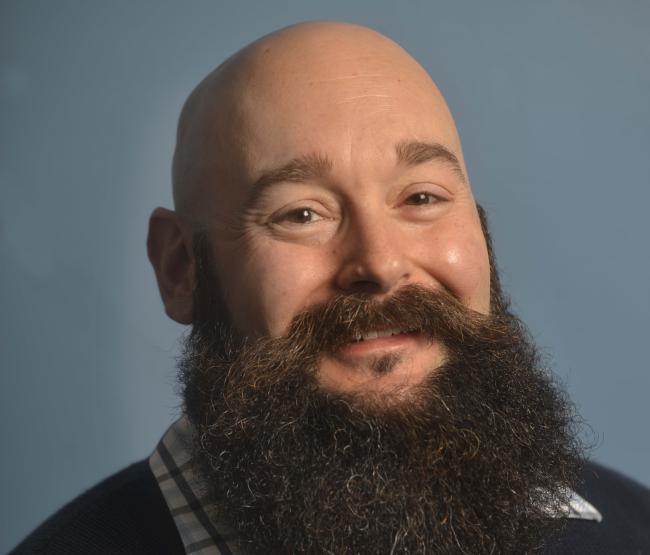 June 20, 2022, GRAND RAPIDS, Mich. -- Michael Tuffelmire had a difficult time adjusting to civilian life after returning home from serving with the Army during the Iraq War.

“I sought treatment at the Veterans Center, and one recommendation was that I go to college to build myself professionally,” he said. “GRCC was a very welcoming environment with other vets I could network with. I worked on the campus and went to school full time, so I spent a good amount of time at GRCC.”

Tuffelmire made connections on campus, serving as treasurer of the Black Student Union and participating in a one-of-a-kind event.

“Professor (Robert) Hendershot of the History Department picked me to take part in an Irish peace conference with former members of the Irish Republican Army,” he said. “I was able to have dinner with them on campus. The entire event was very memorable!”

After graduating from GRCC in 2009, Tuffelmire earned a bachelor’s degree in healthcare management from Ferris State University and a master’s degree in sustainable business from Aquinas College.

“I still tell people that out of all the higher learning institutions I have attended, GRCC was my favorite,” he said. “It also had some of the most challenging classes with hands-on faculty who helped me achieve more than I thought I was able.

“I still think of some of the challenging accounting classes under professor (Jeff) Spoelman, and some of his advice that I still use today. Also, not a day goes by that I do not think about what professor (Felix) Pereiro might say when I am thinking of marketing strategies.”

Tuffelmire is now a Realtor with Kent County Real Estate while working with several community initiatives.

“After graduation, I became a member of the Friends of Transit, who passed a successful tax millage in 2009 that greatly expanded the G.R. metro area bus system,” he said. “I went on to be the director of Decriminalize GR, a political organization that ran a successful ballot initiative to decriminalize cannabis in the city of Grand Rapids in 2012, with the support of several local and state elected officials.”

He served on MI Legalize’s board of directors, working on a successful ballot initiative that legalized recreational cannabis in 2018. The following year, he co-founded the West Michigan Cannabis Guild.

Tuffelmire credits GRCC with helping him build a civilian identity: “GRCC is a gateway to a lifetime of academic achievement.”