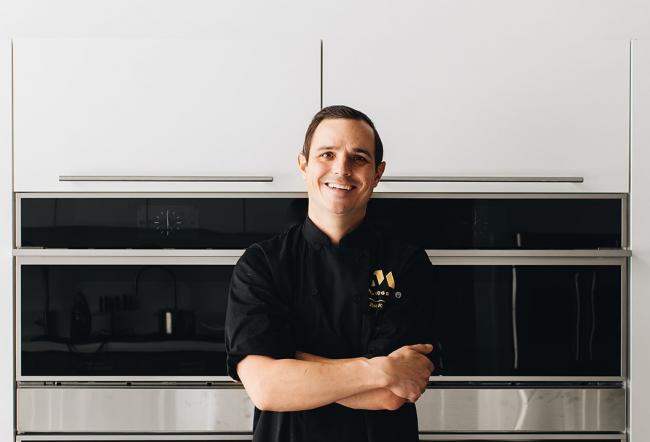 May 9, 2022, GRAND RAPIDS, Mich. – As an alumnus of GRCC’s Secchia Institute for Culinary Education, Jon Liddell is an expert in preparing food for people. His career, however, is built on also being able to cook in front of people.

Liddell headed for a restaurant job on the island of St. Thomas after graduating from GRCC in 2004. He then built a catering business that went on to operate three restaurants.

“We did it all – yachts, airplanes, cruise ships, regattas, breakfast, lunch and dinner!” he said.

After meeting the woman who would become his wife on the island, Liddell relocated to her native Chicago, becoming the sous chef for Sub-Zero and Wolf Appliances. The appliance industry became his new focus and after three years, he became executive chef for Monogram Appliances.

“I have spent the last eight years entertaining, creating, training and building my culinary skills in some of the most beautiful kitchens imaginable,” Liddell said.

He credits GRCC with giving him the confidence to pursue opportunities in a competitive industry.

“The depth of education, hands-on training and connections I made could not be replaced,” he said.

If Liddell needs a reminder of his GRCC days, he has a tangible one close at hand.

“One of my favorite memories from GRCC was learning how to bake bread and pastries,” he said. “Baking and pastries still require the utmost of unbroken concentration for me – it does not come naturally!

“On the first day, our instructor asked us to write down what culinary arts means to us. My word was ‘determination.’ She had this printed for each of us on a metal keychain at the end of the class. I still have it today, and every time I bake bread, I think about that moment and the fact that even more than ever, determination is the necessary component in my business.”