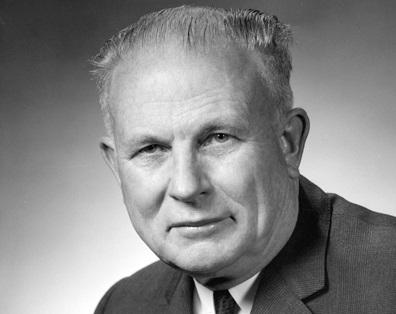 May 3, 2021, GRAND RAPIDS, Mich. – Start at GRCC and go anywhere. Every former student has a story to tell about how GRCC gave them the education and opportunity to be successful.

Go Green! Go White! Go … Raiders? The person credited with transforming Michigan State University from a regional undergraduate institution to a research university known around the world actually got his start at what was then Grand Rapids Junior College.

Hannah was born in Grand Rapids in 1902 and attended GRJC from 1919 to 1921. He then attended University of Michigan for two years, and wrapped up his bachelor’s degree from what is now Michigan State University in 1923.

According to the MSU historical site “On the Banks of the Red Cedar,” Hannah’s first job was with MSU’s Extension Service as a poultry specialist. He took a break to become managing director of the National Poultry Breeders and Hatchery Committee, formed as part of the National Recovery Act.

He returned to MSU in 1934, and became the twelfth president in 1941. Under his leadership and with his vision, the university grew from about 6,000 students to about 40,000. He’s credited with upgrading the curriculum, adding adult education, a campus in Oakland, the international program and the medical program.

Hannah's government service included serving as assistant secretary of Defense, chairman of the Commission on Civil Rights, chairman of the United States Section of the Permanent Joint Board on Defense, and administrator of the Agency for International Development.

MSU’s administration building is named in his honor, and the university erected a seven-foot statue of Hannah as part of its sesquicentennial celebration in 2004.

Also, on his resume – a 1964 GRCC Distinguished Alumni Award.