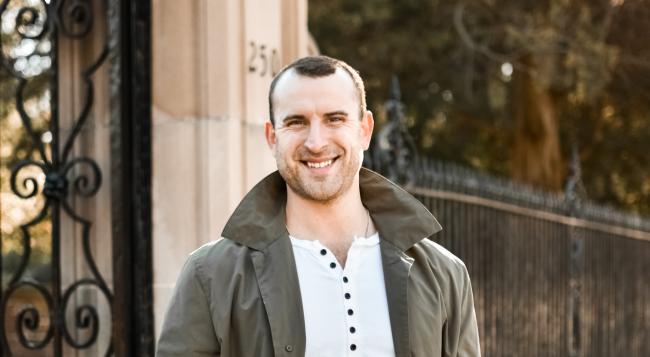 John Vesbit enrolled at Columbia College Chicago after graduating from Grand Rapids Catholic Central High School, but it didn’t work out for him.

“When I returned home to Grand Rapids, I wasn’t sure what to do next, so I took a chance enrolling at GRCC,” he said.

He learned a lot – not all of it was on a syllabus.

“I am not a natural student,” Vesbit said. “I love learning but struggled, at the time, to focus on the work at hand. The patience and grace exhibited by many of the professors at GRCC helped me to overcome some of my bad habits as a student.

“It was at GRCC where I became a much more committed student and adult. Even when I failed, I would get up, dust myself off, and try again. GRCC gave me breathing room to fail and taught me the value of perseverance.”

After earning his associate degree in 2008, he received a bachelor’s degree in theater and speech communications from Siena Heights University and a master’s in theater arts from Eastern Michigan University.

He has worked on many theater productions, including “The Fantasticks” on Broadway. Since returning to Grand Rapids, he has taught classes for Grand Rapids Civic Theater, GRCC and Aquinas College and has directed and acted in West Michigan productions. He manages the box office and patron experience for Grand Rapids Circle Theater and has written plays for the Civic and Circle theaters.

“It’s not hyperbolic to say that I don’t know where I would be now if I hadn’t chosen to enroll at GRCC when I did,” Vesbit said.

“More important than the courses I took, it was the professors at GRCC who mentored and helped guide me through my college experience. It was because of their genuine interest in my success that I was able to hone my passions, not only for theater and creative writing, but they also assisted me with building a strong foundation for my eventual professional career.”

Let GRCC help you start your story. The first chapter starts at grcc.edu/apply