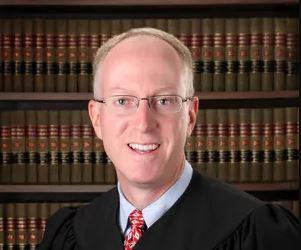 June 6, 2022,  GRAND RAPIDS, Mich. -- Some of John Hallacy’s favorite GRJC memories are tied to his time on the swim team, which finished third in national competition in 1982 and fifth in 1983.

“The team was pretty good,” he said in a 2014 interview. “We were very competitive, and we’re practicing every day, so it really helped me set a schedule, as far as studying.”

Being on the team boosted his confidence, as did his classwork.

“The education was challenging,” he said. “The professors I had were very positive, very encouraging, and they really built up my confidence in what I could do and what I thought I could accomplish.”

Hallacy received his associate degree in 1983 and then a bachelor’s degree at Western Michigan University and a law degree from Valparaiso University.

After working as a prosecuting attorney, he became a judge for the 10th District Court in 2009. Throughout his career, he has worked to improve the justice system.

As a Calhoun County prosecutor, he started a diversion program that gives first-time juvenile offenders the opportunity to have their criminal charges dropped if they successfully complete the program, He also has been honored for his efforts to get funding to provide nurse examiners in sexual assault cases. He has served on the Michigan Parole Board and started a sobriety court in 2010.

“When I went to community college, if you had told me that I would be sitting on a bench in Battle Creek, wearing a black robe, pounding a gavel, I wouldn’t have thought that possible,” said Hallacy, GRCC’s 2014 Distinguished Alumnus. “But Grand Rapids Community College helped me make it possible.

“It’s just the beginning. It can be the beginning of a long path that can take you in any direction you want to go.”