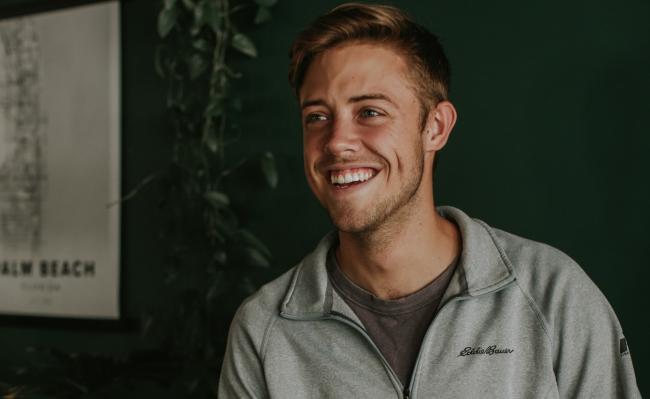 Nov. 22, 2021, GRAND RAPIDS, Mich. -- Start at GRCC and go anywhere. Every former student has a story to tell about how GRCC gave them the education and opportunity to be successful.

GRCC alumnus Parker Wonser loves music. But his passion goes beyond listening – he works to help musicians create it.

“My first experience messing around with the revolutionary OP-1 Swedish synthesizer blew my mind,” he said. “The OP-1 broke every rule I had preconceived about music composition and taught me to think outside the box.”

That epiphany inspired him to create the uRiff Magnet, a device targeted to intermediate-level musicians that helps them break down the musical expression process into two steps: finding pitch and adding rhythm.

“It enables musicians to express and capture musical ideas in their own way – anytime, anywhere,” Wonser said. “Bone-conductive technology makes the entire process entirely silent to bystanders, making it great for mobile brainstorming.”

Creating the uRiff Magnet took him a year of designing and processing feedback from more than 200 musicians.

“Exploring and creating countless prototypes was a fun challenge,” he said. “Initial concepts ranged from mimicking a conductor with an electric wand all the way to telepathic devices.”

Wonser’s invention has been validated beyond the music world: It won first place in the 2020 MWest Challenge student venture competition. He was a student at Ferris State University’s Kendall College of Art and Design at that time but valued the feedback from business professor Felix Pereiro – whom he calls “the dean of entrepreneurship at GRCC.”

“GRCC professors genuinely want the best for their students’ future and were always willing to meet outside of class for additional feedback on my startup,” Wonser said.

Wonser graduated from Kendall in 2020 with a bachelor’s degree in industrial and product design and now lives in West Palm Beach, Fla.

The uRiff Magnet recently earned another award: first place in this year’s Florida ASID competition in the Under 35 Design Concept category. The 24 judges in the American Society of Interior Designers contest selected Wonser’s invention from 150 submissions nationwide. His invention was also endorsed by STUDIO 11, the recording studio of Kanye “Ye” West and Snoop Dogg.

Having finished the nonprovisional patent application process for uRiff, he is searching for engineering and business co-founders. In December, he will complete a six-month startup accelerator program affiliated with 1909 in West Palm Beach and plans to start manufacturing uRiff next year.