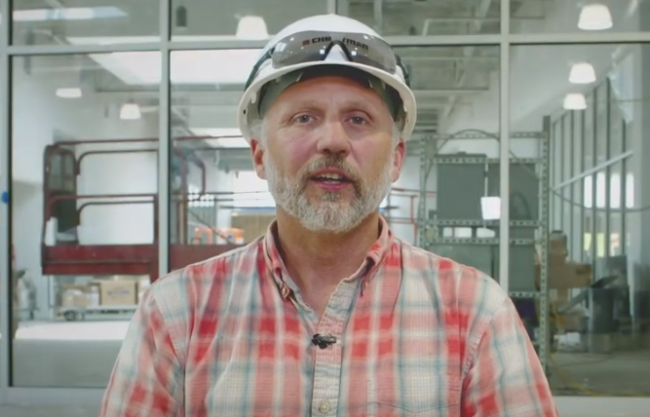 Aug. 23, 2021, GRAND RAPIDS, Mich. – Start at GRCC and go anywhere. Every former student has a story to tell about how GRCC gave them the education and opportunity to be successful.

Cutting the ribbon on the new GRCC Lakeshore Campus represented a new start for students, employees and community members. But for alumnus York Tardy, it was the sign of a job well done.

As project superintendent for The Christman Company, Tardy oversaw every aspect of the transformation of the former JCPenney department store in The Shops at Westshore mall into a 21st Century learning hub.

He then enrolled at what was then Grand Rapids Junior College, where he was a part-time student with a full-time job.

A series of construction jobs later and Tardy is now a senior project superintendent for Christman. Even though he was already in construction as a college student, he says GRJC taught him important skills.

“The critical thinking that you’re taught in college – take the ‘big picture’ stuff and bring it down into the detail part of it – we do that every day in construction,” he said.

The GRCC Lakeshore Campus is a challenging conversion of a 52,000-square-foot big box into a consolidated campus with classrooms and labs, including one dedicated to professional trades including welding and machining.

The project superintendent carries out the designs of the architects and engineers, overseeing the flow of construction and keeping the project on time. Tardy was involved in every part of the construction.

“I do feel like there’s a little bit of coming full circle here: right out of high school, pouring concrete and right into JC after that,” he said. “Here I am back 30 years later building the next facility that’s going to educate the future people that are in our industry!

GRCC President Bill Pink acknowledged Tardy’s role in the project and his ties to GRCC during Thursday’s ribbon-cutting ceremony.

“York was always the person up front saying, ‘Hey, here’s what this thing is all about, here’s what this facility is going to do.’” Pink said, “And what was nice was that we had a family member taking care of it.”