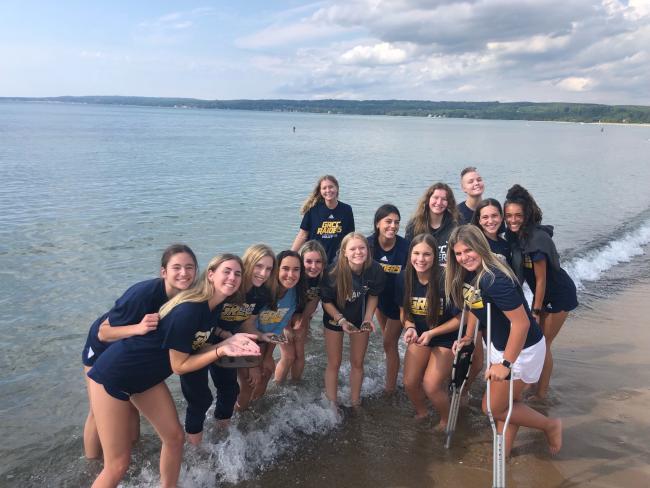 The team is playing in the newly created Northern Conference of the Michigan Community College Athletic Association, and facing several new opponents.

GRCC is playing five games over a five-day period on the road trip, and coaches planned educational experiences along the way.

"I was pleased with the way we executed after such a long delay," assistant coach David Rawles said. "We got better with every point and finished on a high note.  Loved to see everyone contribute on the roster."

Sophomore middle hitter Alena Visnovsky shined, almost meeting her personal goal of three points per set.  She totaled six kills against just one error, hitting .455.  She also added an assist and earned herself the defensive save of the game, which ended up resulting in a Raider point.

Sophomores Kara Hecht and Karissa Ferry both hit .500 for the match and GRCC combined to hit a solid .269 for the match.

Every GRCC player got to see action and 11 different players scored at least one point.

The team, now 5-2 on the season, totaled 12 service aces and had just two reception errors.

GRCC takes another new opponent Saturday at 1 p.m., heading over the Mackinac Bridge to face Bay College in Escanaba.

The team then takes a break on Sunday before playing a doubleheader against Alpena Community College on Monday, and wrapping up the trip against Delta College on Tuesday.

The MCCAA split into three conferences this year in five sports due to the addition of three additional schools to the association. North Central Michigan College, Bay College, and Delta College, are first-year programs.

GRCC was the preseason favorite to win the newly created conference based on a coaches’ poll.