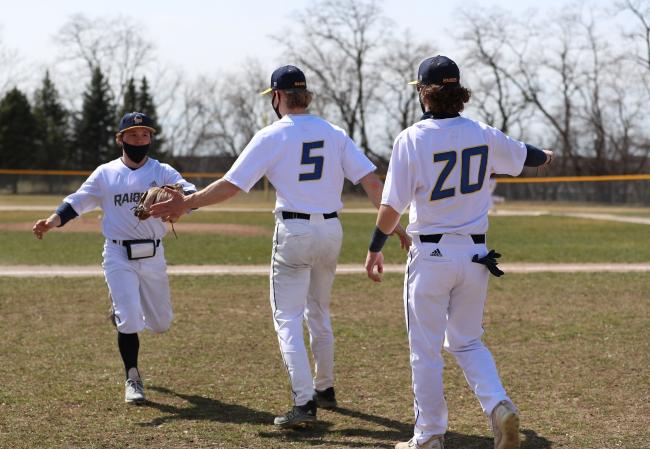 April 6, 2021, GRAND RAPIDS, Mich. – One game was a pitchers’ duel and one was a slugfest, but both were losses for the Grand Rapids Community College baseball team.

After reeling off 10 straight wins, the Raiders are in a bit of a slump, dropping back-to-back doubleheaders.

GRCC fell behind early in the first game of Tuesday’s twin bill against Lansing Community College and couldn’t come back, suffering a 3-2 loss.

Lansing, playing at home, took the lead on a home run by catcher Robert Cavin in the second inning.

The pitching was strong on both sides. LCC pitchers struck out 11, while GRCC sat down seven.

Kolby Dewhirst pitched Lansing to victory, surrendering two runs on seven hits over six and a third innings, striking out eight and walking none.

Keegan Spomer took the loss for GRCC. The righty allowed one hit and three runs over three and two-thirds innings, striking out five.

The Raiders mounted a comeback in the seventh inning, with Ryan Dykstra and Jake Paganelli each launching the ball over the fence, but could not get on top.

Dykstra continued power the offense in the night cap, driving in half of the team’s eight runs in the 12-8 defeat. Dykstra drove in runs on a double in the first and a single in the fourth and a home run in the sixth.

GRCC lost despite out-hitting Lansing 13 to 11.

The Raiders put up three runs in the sixth inning.

Payton Tamm was the winning pitcher for Lansing, going two and a third innings, allowing four runs on four hits and striking out three.

Grand Rapids Community College socked one home run on the day. Dykstra had a long ball in the sixth inning.

GRCC’s record drops to 10-5 after the doubleheader defeats. The team is back at home on Friday with a doubleheader at home against Muskegon Community College.