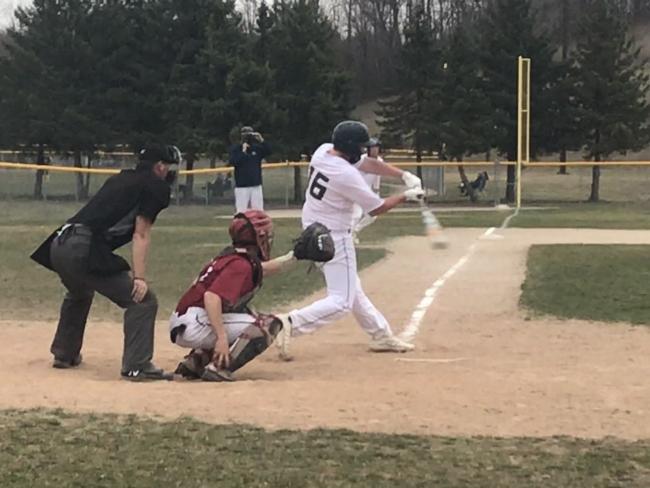 The team hasn’t lost since dropping its opener, and has not given up more than two runs in a game since the initial defeat.

Raiders won the first game of Friday’s twin bill behind the complete game, one-hit pitching of Colin Bradley, who struck out nine and allowed one unearned run in seven innings.

GRCC fired up the offense in the first inning. Ryan Dykstra homered on a 3-2 count, scoring two runs.

The team tacked on three runs in the sixth inning. Fernando Calderon reached on an error, scoring Matt Williams. Jake Ryan walked and then both scored on a double by Sam Schmitt.

The Raiders scored four runs in the sixth on its way to a victory in the second game of the doubleheader. Schmitt, Dykstra, and Jake Paganelli all drove in runs in the frame.

Garrett Cheslek was credited with the victory for GRCC.  The righty lasted seven innings, allowing nine hits and one run while striking out seven and walking one.

Carson Bassett took the loss for Mid Michigan, allowing three hits and three runs over two and a third innings, striking out one.

Dykstra led GRCC with two hits in three at bats. The team was sure-handed and didn't commit a single error. Paganelli made the most plays with five.

The Raiders are now 6-1 on the season and back in action against Mid Michigan on Saturday, this time at home at Belknap Park.