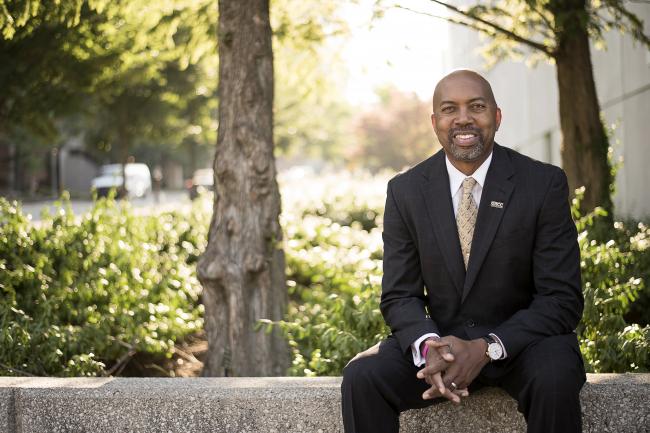 May 10, 2018 GRAND RAPIDS, Mich. — Grand Rapids Community College President Bill Pink has been elected to the board of a nationally recognized, regional accreditation agency that ensures the quality and accountability of colleges and universities.

Pink was elected to the board of trustees of the Higher Learning Commission, which oversees accreditation for degree-granting colleges and universities in 19 states. His term runs from September 2018 to August 2022.

"This is a reflection of the respect leaders in higher education have for the faculty, staff and students of GRCC, and our service to West Michigan," GRCC board Chairman David Koetje said. "I know President Pink will use his experiences at GRCC to help other colleges and universities, and he'll also learn from seeing best practices in some of the best schools in our country."

Authorized by the U.S. Department of Education, the Higher Learning Commission is a private, nonprofit agency founded in 1895 as one of six regional institutional accreditors in the United States. HLC accredits approximately 1,000 colleges and universities that have a home base in one of 19 states that stretch from West Virginia to Arizona.

The HLC board of trustees is a key part of the accrediting agency’s decision-making process. Trustees deliberate on and decide the official action on all recommendations for institutions placed on notice or probation and their removal from such sanctions, withdrawal of affiliation, application for initial candidacy or initial accreditation, and request for change of institutional control, structure or organization.

"HLC is looking forward to welcoming Bill to the board in September," said HLC President Barbara Gellman-Danley. "His higher education leadership record and 25 years of experience as an educator provides a valuable perspective to our accreditation and decision-making processes."

Prior to joining GRCC’s leadership team in March 2015, he served as vice president for academic affairs at Oklahoma State University-Oklahoma City. He has been an educator for more than 25 years, and has taught or coached in Oklahoma, Nebraska, and Oregon. As a college basketball player, he earned awards for his athletic and academic achievements, including a 2016 induction into the York College Athletic Hall of Fame.