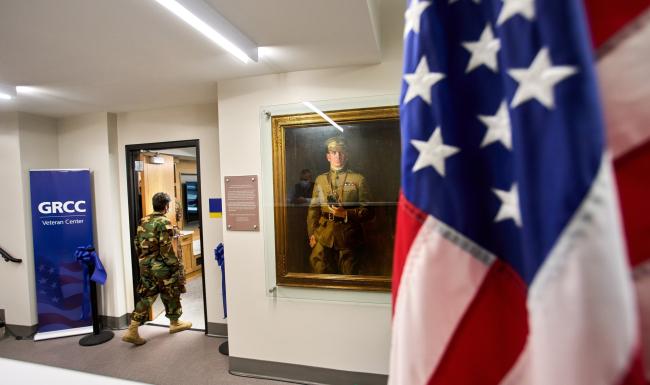 Sept. 28, 2022, GRAND RAPIDS, Mich. -- Come for ArtPrize, then see some of GRCC’s prized art! The campus proudly displays artwork from Grand Rapids artists who are known around the world.

There are three paintings from Mathias J. Alten exhibited at GRCC. Alten emigrated from Germany to Michigan as a young man in 1889. He honed his creative skills as a furniture decorator, and took on commissions to decorate local buildings. By 1899 he established a studio and school in Grand Rapids and became one of the region’s most respected artists, specializing in landscapes, seascapes and portraits.

Alten’s portrait of Lt. Avery C. Gilleo has special meaning for GRCC, and hangs outside the Veterans Center at level G2 of Raleigh J. Finkelstein Hall.

Gilleo was among the 49 students enrolled in the inaugural class of what was then Grand Rapids Junior College before enlisting in the Michigan National Guard, and was eventually deployed to France during World War I, and was promoted to the rank of captain. Capt. Gilleo married his GRJC classmate Eleanore Alten – the artist’s eldest daughter. Avery and Eleanor were the parents of Dr. M. Alten Gilleo and Anita Gilleo, who where both GRJC graduates.

All three paintings were generously donated to GRCC by Anita Gilleo.

GRCC displays many Paul Collins paintings and prints, with his work hanging in nearly every building on campus.

Collins was born in Muskegon but moved to Grand Rapids as a child. He has traveled and painted extensively in the United States and around the world, and his work has been featured in exhibits in 22 states and 13 countries.

Collins has long been a GRCC supporter. The gallery was named in his honor in 2003 and is dedicated to providing diverse, high-quality exhibitions for the education and inspiration of the college and the community.

“My life and my work is not art about art -- it’s about art that can save us all from destroying each other,” Collins said in 2019. “It’s art that will help show respect for all brothers and sisters. If the artists and musicians really pay close attention to the profound effect they can have on people, I think we’d have less of the negative stuff. Because we really, really have reached a point where we really have to begin to realize we all are created equal and all come under the sign of being brothers and sisters.”

Among the best-known works from Collins at GRCC include his painting of Frederick Douglass and a print of his mural celebrating the life of President Gerald R. Ford, with both hanging in GRCC’s Administration Building.

ArtPrize 2022 runs until Oct. 2 and features 750 entries in the interactive art competition.

The Collins Art Gallery is found on the fourth floor of Raleigh J. Finkelstein Hall, 143 Bostwick Ave. NE. Until Oct. 2, the gallery will be open from 1-8 p.m. Monday through Friday, noon to 8 p.m. Saturday, and noon to 6 p.m. on Sunday.

Guests visiting during the weekend should enter through the doors on the south end of Finkelstein Hall Level G2, near the iconic lion fountain, or through the skywalk connected to Parking Ramp A. Signs or staff will direct you to the gallery.