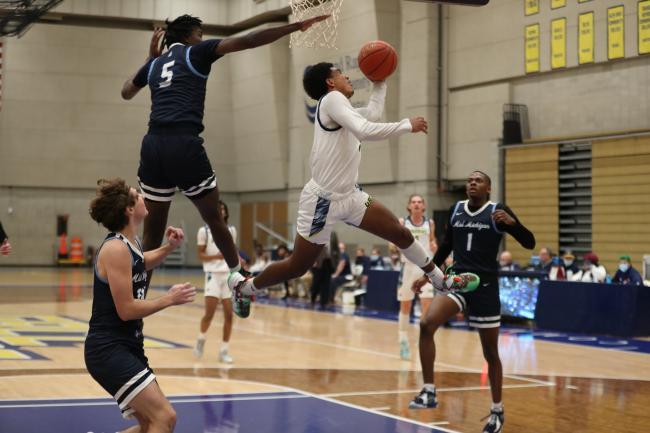 Jan. 24, 2022, BENTON HARBOR, Mich. – Grand Rapids Community College basketball teams swept Lake Michigan College on the road Monday, with the women's team earning a two-point victory that came down to the final shot, and the men's team fighting off many late runs to win 73-61.

Sally Merrill led all scorers with 24 points, and other players came up clutch in pivotal moments for the Raiders in the women’s team’s 63-61 win.

Down eight points in the fourth quarter, GRCC went on a 12-2 run, including two three-point buckets from freshman guard Alysia Wesley to give the Raiders a 55-53 lead.

After two Merrill free throws put the Raiders up 61-58, Lake Michigan College's Aaliyah Reno tied the game with 16 seconds left. Merrill would be fouled on the other end, this time connecting on two more free throws with under six seconds left. Lake Michigan’s Madison Bailey had a chance to win the game at the buzzer but her shot was too long.

"Very proud of the way our kids battled and stayed with it tonight," Coach David Glazier said.  "When we got down seven or eight in the fourth they could have packed it in, but they found a way.  Excited to watch them continue to grow as a team."

The women’s team is on a four-game win streak, improving its record to 9-7 overall and 5-1 in the conference. Lake Michigan fell to 11-5 overall and 5-2 in conference play.

In the men’s game, Ryel Daye continued to stay hot both on the glass and the scoring column, finishing with 22 points and 22 rebounds while adding a team-high four steals.

GRCC led wire-to-wire, leading by as many as 13.  Lake Michigan got as close as two points with 9:11 left in the game, but the Raiders locked down defensively to hang on for the win.

GRCC connected on 10 three-pointers from five different players, including three from Brockton Kohler, who finished with 13 points and seven rebounds.

"I was happy with our defensive intensity and execution," Coach Joe Fox said. "Our guys were locked in and really made Lake Michigan work hard for their shots. That gym is always a tough environment to play in and a great loud atmosphere, and the team communicated well and held off a late rally.  It's always great to get a win on the road.

Both teams return home Jan. 26, but with a bit of a twist.  The men's game will tip things off first, playing in the 5:30 slot, with the women's game to follow.