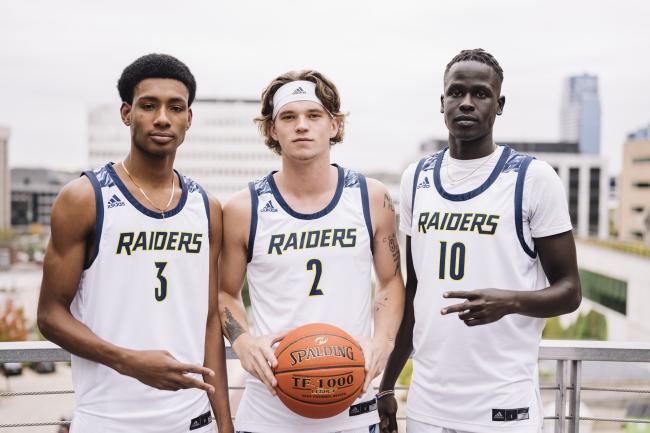 Merrill, a freshman from Allegan, surpassed her previous career-high by eight points in the Raiders’ 67-53 victory. Eleven of the points came in the Raiders’ big 25-point second quarter.

"Overall the team played really well as a unit," Merrill said after her team's third-straight victory. "We had some lulls that we've got to correct as a group but overall everyone contributed to a solid team victory."

Head coach David Glazier was just as proud as the total team effort.

"Happy with a solid team victory today," Glazier said. "We saw a number of good things from a number of different players. We also made note of areas where we can continue to improve.  Sally was really good today. She was active, finished scoring opportunities and made plays when we needed them."

Moore, a Forest Hills Northern High School grad, was one of eight Raider men who scored in the team's 87-84 victory.

GRCC connected on a season-high 13 three-point attempts, including three each from Rico Wade, Jovante Jones and Justus Clark.  Jones, of Saginaw, dropped in 14 while Wade, of Atlanta, Ga. scored all nine from long range.  Clark, from Farmington Hills, scored 18 points.

“After a disappointing first half, the team really brought the energy, effort, and enthusiasm in the second,” coach Joe Fox said. “I was very pleased with the team’s response. It feels great to be heading into a long break with a win. We have some things to work on over break, and a long time in which to do it. Even though it was a total team win today, I want to highlight Nyuon Nhial, who really set the tone for us in the second half with his energetic play. He helped us turn the game around.”

GRCC's men's team snapped a three-game losing streak and is now 5-6 on the season.

The women will then square off against the defending national champions, Lake Land College on Dec. 17 at 5:30 p.m. The men won't resume play until January when the conference season begins.