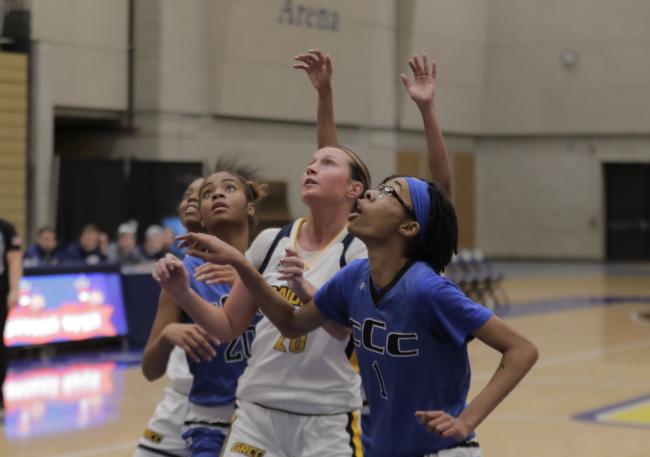 In the second game of the doubleheader, GRCC's men's basketball team dropped its game 88-75. It is the team’s third-straight loss after starting the season with 11 consecutive wins.

The women's team led wire-to-wire, and by as many as 39 points, cruising to an 81-47 win and the team’s second victory in a row, improving to 7-4 overall.

Merrill scored a game-high 21 points and added 18 rebounds, which was the second most of her career.

Four other Raiders finished in double figures, including sophomore shooting guard Alyssa Katerberg, who had a career-high 13 points.

GRCC had five season-highs performances as a team, including points, field goal attempts, field goals made, rebounds and steals.

Emersyn Koepke had a career-high seven steals to go with her nine points and team-high four assists.

The men's team jumped out to an 11-point lead, but Bay College came back to take a 43-39 half time lead and they never looked back, eventually taking the game 88-75.

Brockton Kohler lead the team with 18 points and eight rebounds.

The Raiders finished with a season-low in field goal percentage and converted a season-high 20 turnovers.