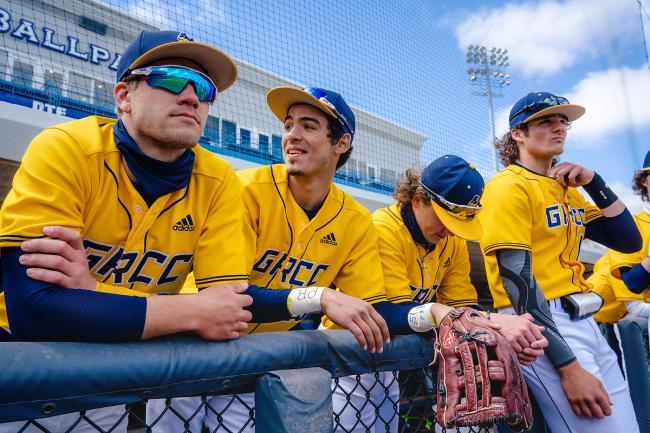 The Raiders won the first game 6-5 on a walk-off single by Sam Schmitt, then rallied for a 4-3 win in the night cap.

The first game was tied at five with GRCC batting in the bottom of the eighth. Pinch hitter Matt Williams was hit by a pitch, and was replaced by Keaton Peck., who moved to second on a sacrifice bunt by Jake Ryan. Peck moved to third on a passed ball, then scored the winning run when Schmitt singled on a 3-2 count.

Bradley Dunn took the win for GRCC, pitching two innings, allowing no hits and no runs while striking out one and walking one.  Jerad Berkenpas threw one-third of an inning in relief out of the bullpen.

Schmitt went 2-for-3 at the plate to lead the Raiders in hits.

The second game was tied in the fifth inning when Jake Paganelli led off with a single and was replaced with courtesy runner Logan Cross. Cross moved to second on a sacrifice by Caleb Englesman, and scored on a Matt Williams double to left. Williams then came around on a single by Ryan.

GRCC socked one home run on the day, with Peck going deep in the third inning. Williams led the Raiders with two hits in two at bats.

The Raiders are now 17-10 on the season and are back in action Saturday, taking on Glen Oaks again, this time in Centerville.