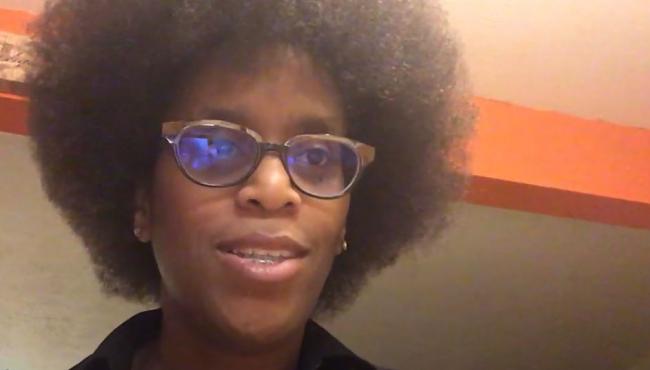 A School News Network feature -- GRCC English professor Mursalata Muhammad is among a group of college educators amplifying voices of people of color in creating a 48-word, 18-page antiracism glossary, with examples of experiences in their own lives to support the definitions.

From “acculturation” to “tone-policing,” the Antiracism Glossary for Education and Life was developed by a team of eight scholars who are involved in a group called Colleagues of Color for Social Justice. The glossary is published in the Spring/Summer 2021 edition of the Journal of College Academic Support Programs.

The goal of the word list is to serve as a tool to explain terms related to attitudes, behaviors and policies that impact people’s lives, particularly within academia. The authors say it could be useful for educators and those working in classrooms, administrative roles and educational equity programs.

Muhammad said she sees its potential as a go-to reference in employee and teacher education — a way for those who work with students to become aware of the words, definitions and impact.

“I see this glossary as something much more for teachers and people in the profession, but not something to give directly to your students,” she said.

So far, the co-authors have been asked to share the document at their institutions. Muhammad is planning on presenting it during an upcoming staff learning day.

The glossary can also serve as a foundation on which future publications can expand. The plan is to continue adding to the document, said David Arendale, associate professor emeritus of History in the Curriculum and Instruction Department at University of Minnesota-Twin Cities.

“It’s a living document,” Arendale said. “I could see how this could be a part of an ongoing conversation on race and learning with faculty and staff at an institution.”

Race and Social Justice Through Publishing

The Colleagues of Color for Social Justice was created in 2020 to provide a forum for people of color in higher education to produce publications and media projects that intersect with race and social justice. Arendale, who is white, started the group to bring together writers and researchers who are people of color.

To gauge interest in starting the group, he posted an invitation on a national electronic mailing list. Fifty-two people responded and about 30 have since contributed, including Muhammad and others who have created the glossary.

Noting that he resides in the city where George Floyd was murdered, Arendale said such recent high-profile cases have brought an increased level of consciousness about issues of race, and further shows the need to bring diverse voices to the table.

“I asked for help, and we have been richly rewarded because of this multi-talented, multicultural writing team that produced the glossary,” he said.

Muhammad and Arendale acknowledge that they cited many other existing glossaries in their work, including one by Ibram X. Kendi, author of “How to Be an Antiracist.”

“It’s more than not being racist; being neutral is not good enough,” Arendale said. “That was something we wanted our glossary to follow Dr. Kendi’s leadership on. You need to go further and you need to be an antiracist.”

The word “antiracist” is included in the glossary and defined as: “The work of actively opposing racism by advocating for changes in political, economic and social life. Anti-racism tends to be an individualized approach, and set up in opposition to individual racist behaviors and impacts.”

The glossary goes beyond succinct definitions and includes examples of how authors of color, who self-selected the terms they worked on, have experienced the terms.

“We wanted real-life examples, so those examples are coming from the authors, either their lived experiences or experiences they have firsthand knowledge of,” Muhammad said.

Working on the glossary was “triggering” for some authors, she said, as they remembered being treated with bias or prejudice. Muhammad and Arendale want everyone who uses the glossary to be aware that it can cause strong reactions.

“Doing this kind of work, we need to be sensitive,” Muhammad said. “It’s a tool that should be handled carefully.”

As a white male, Arendale said the glossary has gotten him to think more deeply and move forward despite being uncomfortable at times.

Muhammad said it is a tool that can help people grow and look beyond the “bubbles” they live in. Discomfort often comes with that process.

“People do live in their bubbles, and those bubbles are sometimes aggressively, radically protected and, sometimes just by the nature of where you live, constantly insulated,” Muhammad said. “This glossary is a way, at least in one potential sphere of a person’s life, to open to perspective. Any opening to perspective is an uncomfortable experience.”