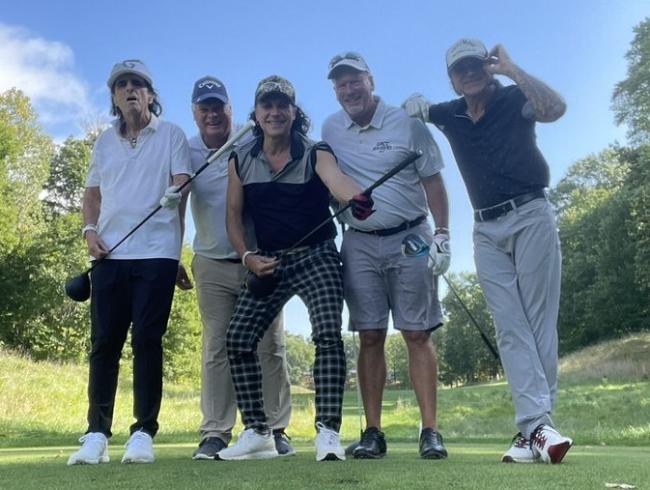 The legendary rocker is known for his outlandish stage show, and also for being an avid golfer. Prior to Wednesday’s DeVos Performance Hall concert, Cooper and several band members headed to Egypt Valley Country Club in Ada, the home course for the GRCC golf team.

“He was one of the most sincere, normal guys you want to meet,” Forton said. “I’ve been rocking to this guy for 45 years! I was a little nervous at first and called him ‘Mr. Cooper.’ And he said, ‘Nah, just call me Alice.' He was joking around and being just one of the guys.”

Cooper, born Vincent Furnier in Detroit, credits the sport for helping him overcome his addiction to alcohol. His 2007 book is called “Alice Cooper, Golf Monster: A Rock ‘n’ Roller’s Life and 12 Steps to Becoming a Golf Addict.”

Cooper was joined at Egypt Valley by GRCC assistant golf coach Mark Rasmussen and guitarist Ryan Roxie and bass guitar player Chuck Garric from his band. The group played just nine holes so the musicians had time to get ready for the show.

Cooper told Forton he plays about 300 rounds a year. He’s appeared in ads for Callaway Golf equipment, and the company tries to line up course time while the band is on the road.

“He’s a pretty good player, shooting a 39 for the nine holes,” Forton said, who was headed to the concert. “I tried to recruit him for our GRCC team, but he said he’s a little busy right now.”

Off the course and on the stage, Cooper is a Rock and Roll Hall of Fame inductee known for songs including, “Under My Wheels,” “School’s Out,” and “Welcome to My Nightmare.”

Forton is in his eighth year as GRCC golf coach – named MCCAA Western Conference Coach of the Year seven times -- and is the director of instruction at Egypt Valley.

Forton said the Raiders had a good day on the links, too.

Conner Oman finished in the top-10 helping the Grand Rapids Community College golf team to a fifth-place finish at the Aquinas College Fall Invitational on Wednesday.

Oman, a sophomore who graduated from Coopersville High School, shot a 76 on the par-72 Kaufman Golf Course, which was just one stroke away from tying for fifth place.

As a team, GRCC combined to shoot a 314, which was 26 strokes higher than Hope College, which ran away with the crown, defeating second place Lourdes University by 17 strokes.

GRCC was the only two-year institution in the 12-team field.

Freshman Mason Anderson and Drew Harrington each tied for 20th place while Ty Marchlewski finished tied for 26th place, shooting a respectable 79 and 80.

Other Raider golfers included McCoy Denhartigh and Hunter Schwiling with 80 strokes and Sam Foss, with 94 strokes.