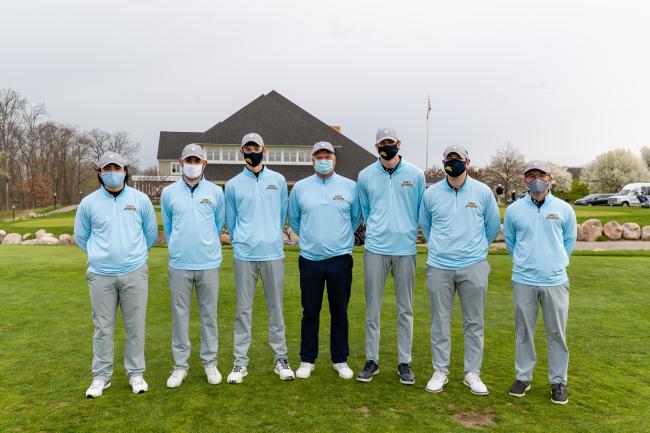 April 29, 2021, GRAND RAPIDS, Mich. – Five members of the undefeated Grand Rapids Community College golf team posted the top five scores in the conference for the season, and were named to the All-Conference team by the Michigan Community College Athletic Association.

“This was an historic season,” Interim Athletic Director David Selmon said. “GRCC student-athletes worked hard, were prepared and dominated this season. They earned these honors. My congratulations to them as well as coach John Forton and our Athletic Department staff on a job well done.”

Tyler Hausserman from Ionia led all golfers in the conference with a season score of 372 strokes, followed by Arie Jackman of Caledonia with a 379, Dominic Luciani of East Grand Rapids with 384,   Logan Templeton of Portage with 393, and Davis Courtright from Zeeland with 398.

Muskegon’s Zach Petroski followed Courtright by 10 strokes and was the only non-Raider to earn conference honors.

The golfers are in action next in a non-conference Kirtland Community College Invitational in Grayling on Friday. The team then will prepare for the National Junior College Athletic Association Region XII Championship tournament starting on May 11 at Bedford Valley Golf Club in Battle Creek.