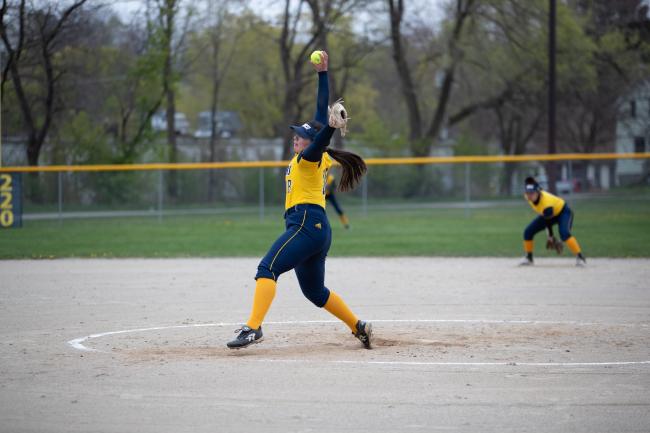 Abrahamson was sharp in the second game as well, but the Raiders ended up on the short end of a 4-2 game.

A sophomore from Wyoming, Abrahamson was spectacular, striking out nine and issuing no walks in a seven-inning game.

Ancilla’s Amanda Hartman was nearly as good, scatting five Raider hits and keeping runs off the board for the first five innings.

Haley Van Huis led off the bottom of the sixth with a triple, and came around to score when Brooklynne Siewertsen brought her home on a bunt single for the game’s only run and the Raiders’ fourth win of the season.

The same pitchers squared off in the second game, this time with Hartman emerging with a narrow win.

Van Huis smacked a single to start the first inning, and moved to second on a sacrifice bunt from Siewertsen. Van Huis then scored an unearned run on a dropped fly ball.

Abrahamson held Ancilla scoreless until the top of the sixth inning, when Ancilla batters hit a triple, double and single and ended with three runs on the scoreboard. The Vikings added another run in the seventh inning.

GRCC attempted a comeback after Krin Beach singled and scored on a Kyla Andres triple. But the Raiders couldn’t move any more runners across the plate, settling for a 4-2 loss and a split of the twin bill.

The 4-22 Raiders are back in action on Wednesday on the road against Mid Michigan College.