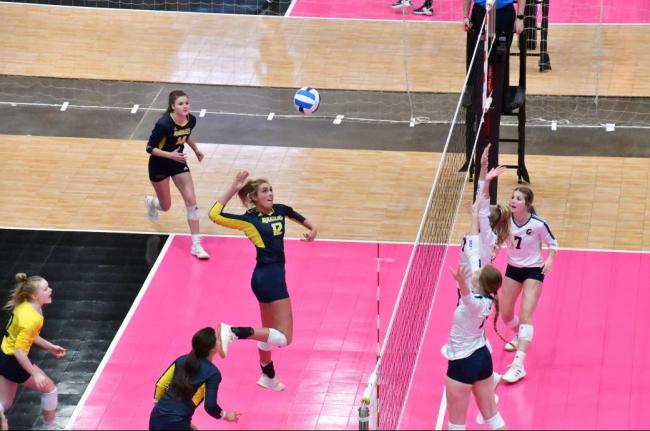 April 14, 2021, GRAND RAPIDS, Mich. – With its season on the brink, Grand Rapids Community College’s volleyball team mounted a remarkable comeback to win its second match of the day and advance to in the NJCAA D2 National Tournament.

The Raiders will play again at 10 a.m. on Tuesday in an effort to finish in the top 10 of the tournament, played in Cedar Rapids, Iowa.

After dropping its Tuesday match in straight sets, the Raiders rebounded against Potomac State in the consolation bracket, winning 25-20, 25-10, 25-11.

The Raiders were led offensively by sophomore Kylie Oberlin, who recorded a team-high 12 kills, followed by freshman Kara Hecht with eight kills.

Freshman Audrey Gower and Oberlin each recorded two aces. Strong play by the Raiders defensively held Potomac state to a .000 hitting percentage, as the Raiders hit .340.

The team then advanced to play Pima Community College, which won its first match of the day in five sets.

Facing elimination, the Raiders were down by nine points in the fourth set, rallied to force a fifth set and ended up winning.

“One of the greatest comebacks I have had the pleasure to coach,” Coach Chip Will said. “The kids never stopped fighting and believing in each other.”

Grand Rapids advances to the semi-finals of the consolation bracket in hopes to finish in ninth place overall.