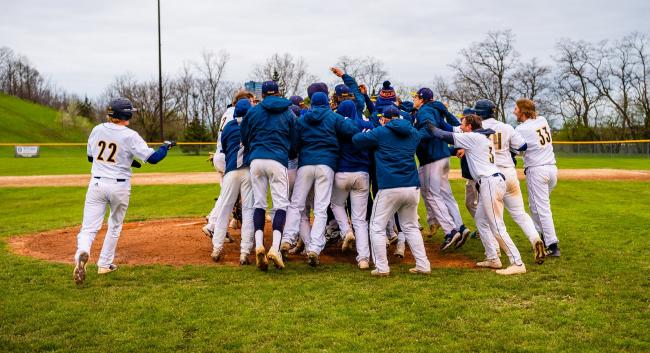 May 12, 2022 - ADRIAN, Mich. - The Grand Rapids Community College baseball team is moving ahead in the NJCAA Region XII tournament after two come-from-behind victories against Jackson College in the quarterfinals on Thursday.

The team used a big eighth inning in game one to win 6-4, and were victorious in the nightcap 2-1 after scoring the go-ahead run on a double steal in the sixth frame.

GRCC has won 16 games in a row since a 3-3 tie against Calvin University on April 19 at LMCU Ballpark.

Jackson, seeded fourth in the tournament, scored early with a sacrifice fly in the first game against fifth-seeded GRCC.

Jackson tacked on one more run in the fourth inning, and GRCC got on the board after an RBI single by Xander Reisbig in the sixth inning.

GRCC scored five runs in the top of the eighth. Jackson closed the gap by scoring two runs, but GRCC held on for a two-run victory.

Jared Berkenpas picked up the victory, allowing two earned runs while striking out six. He is now 8-2 on the season.

Game two was a pitcher's duel, with Drew Murphy on the mound for Grand Rapids against Noah Stants for Jackson.

Down 1-0, Andres Rivera-Calderon lined a single to left to score Zacarias Salinas to tie the game.

GRCC’s Ryan Dykstra scored the go-ahead run in the bottom of the sixth inning with runners on the corners with a double steal.

Eliott Traver picked up his 10th save of the season by retiring Jackson in order in the final inning.

Dykstra led the offense on the day with four hits and Rivera-Calderon added three.

The team will continue play in a double elimination four-team tournament starting May 19, with the opponent and game time to be determined.