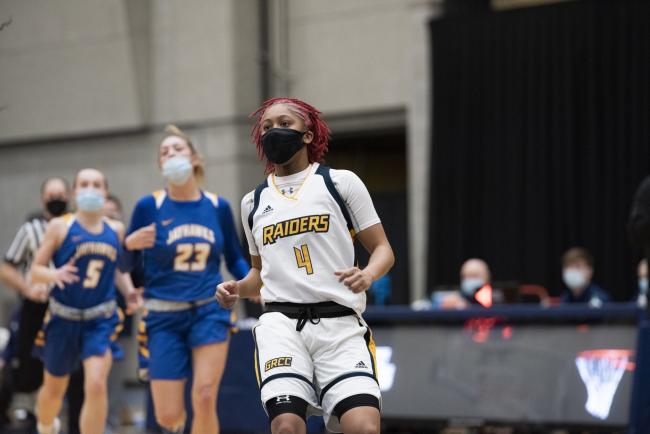 GRCC was competing in the National Junior College Athletic Association D2 National Tournament for the first time since 1978. The team needed a win to stay alive after falling to Johnson County Community College – the top team in the nation – on Wednesday.

The Raiders were ahead through the first quarter and trailed by just a point at the half. But Pima, the No. 9 seed, went on a roll in the third quarter, and GRCC was never able to catch up.

Jayla Bibbs had 8 points and 17 rebounds – the NJCAA announcers joked on the broadcast she had about a million boards during the season.

Shonya Hawkins had 14 points and three rebounds. Eurasia Green-Boyd had 10 points and six rebounds and Danielle Lamancusa had nine points and seven rebounds.

The Raiders ended the season with an impressive 12-5 record, overcoming a variety of challenges created by playing a delayed and shortened season during a pandemic.

Hawkins brought energy and intensity to the team, earning Player of the Year honors from the Michigan Community College Athletic Association’s Western Conference.

A sophomore from Grand Rapids, Hawkins earned All-Region, All-MCCAA honors along with Bibbs, one of the best rebounders in the nation.

Bibbs, a sophomore from Buchanan, Hawkins and Green-Boyd were also named to the All-Defensive Team.