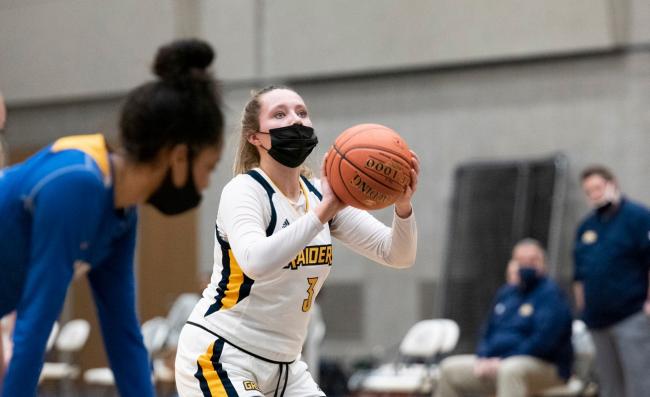 The women’s team improved its season record to 9-2 with a 62-58 squeaker against Mid Michigan College on road in Mt. Pleasant. But the men’s team fell just short for the third game in a row, losing when the opponents sank a three-point shot at the buzzer to win 69-66.

The volleyball team, playing at home, bounced back from a tough loss to Muskegon Community College to top Lake Michigan College in three sets to improve its record to 8-4.

The women’s team won its second in a row after nearly breaking Macomb Community College’s 39-game winning streak a week ago.

The men’s team loss was difficult after coming back from a 17-point deficit at halftime, and mounting a five-point lead.

The game was tied after Mid Michigan missed two free throws with just six seconds left. Mid Michigan’s Noah Pruitt launched a three-pointer to give the game to the home team.

The volleyball team closed out the regular season by beating Lake Michigan college in straight sets, 25-20, 25-20, and 25-10, on senior night.

Kylie Oberlin had 12 kills and 3 aces, Audrey Gower had 15 digs, 1 ace and Savannah Stoepker had 4 aces.

Prior to the game, the volleyball team welcomed Karissa Ferry of Chesaning, who signed to play volleyball and basketball for GRCC on Friday.

Joined by parents Ryan and Allison, Ferry celebrated the signing and stayed to watch the game against Lake Michigan.

Ferry was an All-Region volleyball player for Chesaning this year, and also played basketball and track and field. She's a star in the classroom, with a 4.0 GPA.