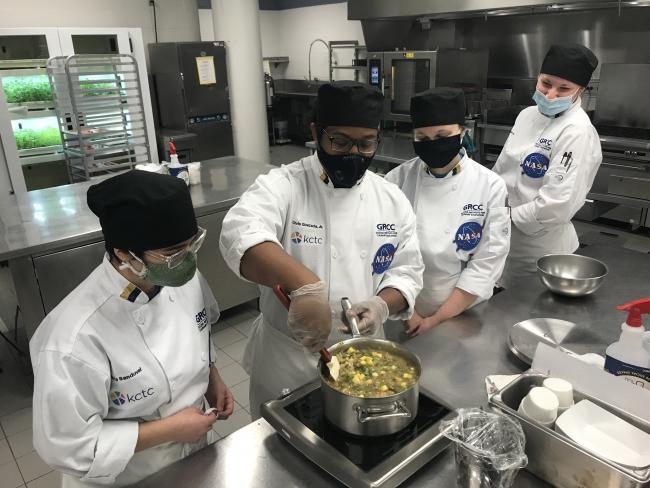 Four KCTC students partnered with the Secchia Institute for Culinary Education for the NASA HUNCH competition. Every year, NASA challenges culinary schools to create menu items for the astronauts at the International Space Station. But the national challenge is about more than creating the best-tasting takeout. NASA scientists are studying how to keep astronauts healthy and prepare them for potential long-term missions.

"NASA is figuring out how to feed astronauts heading to Mars by feeding humans on a six-month space trip," said Werner Absenger, program director for the Secchia Institute for Culinary Education.

"One would think that this is a job for the country's most prestigious experts -- and it sure is. But, through the NASA HUNCH Culinary Challenge, high school students play a considerable part in developing food for microgravity to feed astronauts and ensure successful NASA missions. When you think about that, that's an unbelievable opportunity for high school students who think they want to make a rewarding career in the culinary arts."

NASA required teams to submit two healthy “comfort food” recipes. After evaluating both submissions from the KCTC-GRCC team, NASA experts picked a recipe for chili verde with rice and beans for the students to develop further.

The KCTC is a program operated by the Kent Intermediate School District to provide high school students in-demand career skills.

The KCTC-GRCC team of Elizabeth Afton, of East Grand Rapids; Grace Haaksma, of Grand Rapids; Olivia Sandoval, of Wyoming; and Chris Quezada, of Kentwood, finished out of the top 10 and won’t move to the next round. But the students said the experience was still valuable, and they learned much about the science behind food preparation.

"There are many problems students have to deal with and come up with creative solutions," Absenger said. “The team had to research and write a paper on food safety, stability, palatability, resource minimization, variety, reliability, and usability."

Out of around 30 schools competing this year, 10 finalists will have an opportunity to travel to Houston to prepare a final version of their dish for judges from the Johnson Space Center’s food lab, personnel from the International Space Station, and astronauts. The winning recipe will be prepared by NASA and flown to the International Space Station for the astronauts to enjoy.

A team from the Secchia Institute for Culinary Education came close to winning the contest last year, finishing second in a field of 56 teams. Thomas Brown and Victoria Uy prepared a dish of Indian butternut squash, mango chicken and brown rice.