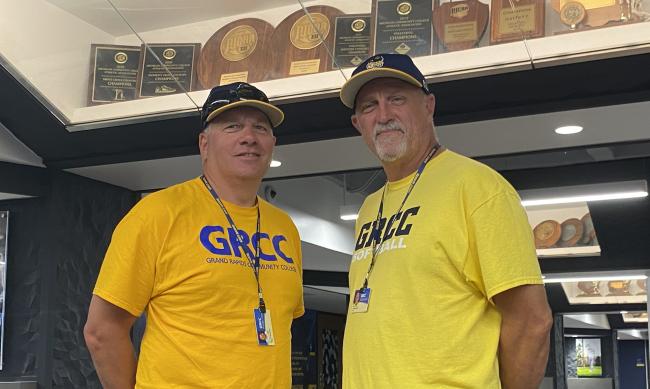 White was the head coach at Muskegon Orchard View High School between 2015 and 2020, accumulating a career record of 160-55.  He also coached the Lakeshore Storm, a softball travel ball team in West Michigan, for eight years and was an assistant for Muskegon Community College.

"I'm looking forward to working with our new head coach Chuck White and his assistant, Steve Roersma,” Athletic Director Lauren Ferullo said. “Both have an established reputation within the softball community in West Michigan.  They have hit the ground running and I expect them to provide a great student-athlete experience to our softball team.

Roersma’s daughter Annika played on the Muskegon team, and has transferred to GRCC.  Annika Roersma played in the outfield and in 43 games batted .389 and had 43 RBI, 3 home runs and was second on the team with 22 stolen bases.

Bill Roersma, Steve Roersma’s brother, was an NJCAA Wrestling All-American for GRCC in 1976.

The GRCC softball team did not compete in 2022, but outgoing coach Molly McKinney recruited a solid team for 2022.

"I was very sad to hear that Molly was not going to be able to continue in her role as the head softball coach at GRCC," Ferullo said. "I am so grateful that she was able to recruit a quality class of student-athletes so we can continue the softball program.  Her hard work and dedication to the program over the last year did not go unnoticed and I want to thank her for everything she did."