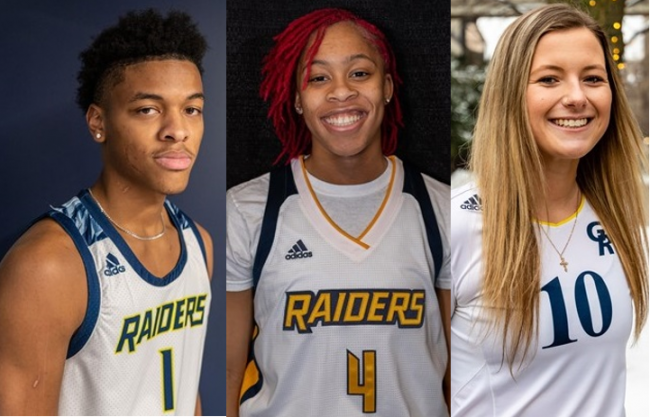 In the opening set, Kylie Oberlin led the Raiders with four kills and hit .667. Kailey Carmean picked up six assists and four service aces while Audrey Gower picked up a set high five digs. The visitors had 11 kills on 22 attempts, committing only one hitting error to hit .455 as a team.

In set two, Oberlin picked up another four kills paired with another .667 hitting percentage. Zari Kruger ran the offense in set two picking up a career high 10 assists. Kruger also led the Raiders with three service aces and added three digs. Gower led the defense picking up five digs again with Annie Holesinger and Kara Hecht each picking up a block.

In the third and deciding set, Gabi Kitley led the Raiders with five kills hitting .714. Carmean ran the offense once again and picked up a team high six assists while adding a kill and another ace.  Freshmen Kara Hecht and Gower each picked up two digs. The Raiders closed out the set hitting .370 as a team.

For the match, Oberlin led all players with 9 kills while hitting a season best .600.  Freshman, Alena Visnovsky led the Raiders with two blocks including a solo. Gower, the Raiders libero for all three sets, anchored the defense with 12 digs. Kruger recorded 12 assists and Carmean recorded a career high five service aces.

The Raiders will play their next match at home against the first place Jayhawks of Muskegon Community College at 6:30 p.m.

The win brings the Raiders’ season record to 3-2, with the team preparing to face a tough Muskegon Community College team at home in Grand Rapids on Tuesday.

For the women’s basketball team, the win was the team’s fourth straight, and overpowered Glen Oaks, 63-31, a 32-point difference.

The women’s team has not lost since dropping the season opener, and is now sitting on a 4-1 record. The Vikings fall to 2-6.

Isaac Anderson led the Raiders with 20 points and 18 rebounds, followed by Chandler Collins with 13 points and nine rebounds.

Grand Rapids is now 3-2 on the season, and the Vikings are 0-9. The basketball teams next face the Delta College Pioneers on Wednesday at the Gerald R. Ford Fieldhouse.