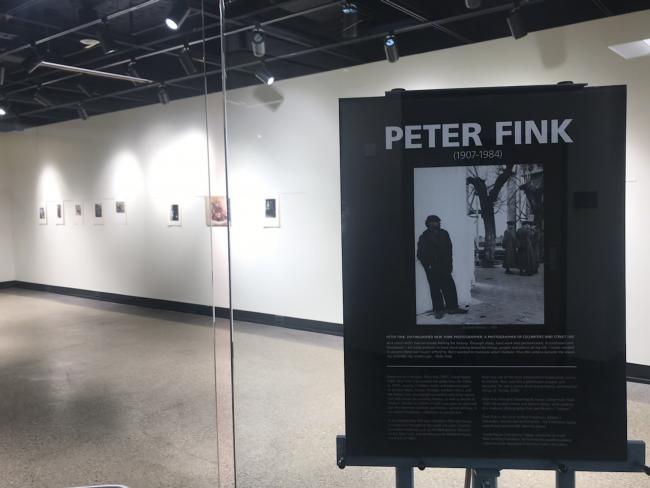 Mort and Peg Finkelstein, archivists for the Finkelstein family, are allowing the Grand Rapids Community College Foundation to keep the collection with a permanent bequest in the future.

“It is with great honor and pride that we are able to loan, from our personal family collection, many of these works by Peter Fink,” Mort Finkelstein said. “This photography collection was all originally sent to our parents by Peter during his many years of travel throughout the world.”

The public can view the photos -- which have been exhibited in more than 60 institutions in the United States, Israel, Cuba, France and England -- starting Aug. 24 in GRCC’s Paul Collins Art Gallery. The gallery, which is on the fourth floor of Raleigh J. Finkelstein Hall at 143 Bostwick Ave. NE, is open 10:30 a.m. to 7 p.m. Mondays through Thursdays; admission is free.

“We’re so proud not only to accept this wonderful gift, but to be able to share it with our community starting with this exhibition,” said Dr. Kathryn K. Mullins, GRCC vice president for Advancement and executive director of the GRCC Foundation. “GRCC, our students, and our community continue to benefit from the generosity of the Finkelstein family. Current and future students can learn about Peter Fink, his roots here at GRCC and be inspired to follow their own dreams.”

Fink, who attended what was then Grand Rapids Junior College from 1926 to 1929, started his career as a designer for V’Soske, a local rug manufacturer. His promotional efforts made the V’Soske name synonymous with the finest hand-crafted rugs produced in the United States during the 1930s and 40s. In 1942 he arranged the first exhibition of contemporary rugs and tapestries in the United States, held in the Museum of Modern Art. He later went to the couture firm of Lucien Lelong, where he was a package designer and a decorator for its French and American salons. He eventually became the art decorator for Lanvin Parfums.

He traveled the world during the 1950s through ‘70s -- always with his camera. His photos captured life and street scenes in post-war Japan, France, Portugal, northern Africa and the Middle East.

His work was the subject of 51 one-man exhibitions worldwide; the last time his collection could be viewed in West Michigan was at the Grand Rapids Art Museum from February 9 thru March 18, 1990.

“I am lucky enough to have lived among beautiful things, people and places all my life,” Fink said in 1969. “I never needed to possess them, nor could I afford to. But I wanted to translate what I beheld. Thus, the camera became my viewer, my recorder, my mind’s eye.”