My GRCC Story: MaryAnne Flier pursuing a passion for social justice through geography 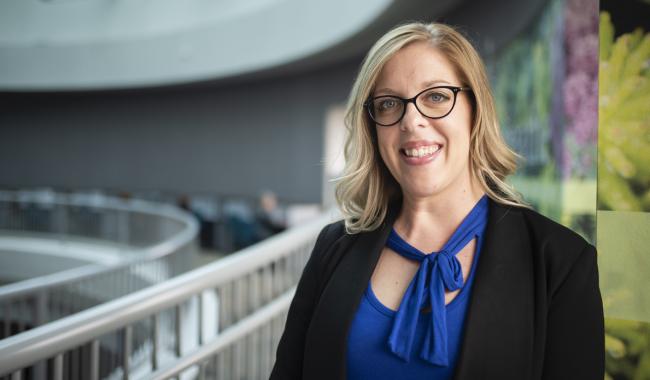 When her kids started school, MaryAnne Flier returned to GRCC.

“I took a few classes at GRCC back in 2006, but at the time, I didn’t have a clear direction that I wanted to take,” she said. “Because of that lack of clarity — and because I had a good job at the time — I decided that college wasn’t a necessity for me.”

In 2016, she had been a stay-at-home mom for five years. But now she was ready for her next chapter and made plans to get an associate degree and then enter GRCC’s Dental Assisting program.

“As I worked through the courses required for the (Associate of Arts) degree, it became clear to me that if I was going to continue in any program, it would need to better align with my passions,” Flier said.

Dental Assisting was out, but she wasn’t sure what her new pathway was. She decided to work on requirements for her associate degree while she figured it out. As part of that new plan, she took a physical geography class in fall 2018.

“Honestly, the only reason I took it was because it seemed like the lesser of three ‘evils’ when it came to my remaining options for a physical science and lab course,” Flier said.

That geography class turned out to be more interesting than she thought, and she learned from professor Mike DeVivo that she could build a career that combined geography with her passions for social justice and community development.

Geographers influence people and their environment locally and around the world, DeVivo said.

“Urban and regional planning requires the talents of geographers, as do efforts to combat social injustice, environmental despoliation, food insecurity and geopolitical problems,” he said, adding that geographers work in both the private and public sectors.

“For example, the U.S. Department of State has an Office of the Geographer that has been in existence since 1929, which engages in the analysis of international geographic issues, such as refugee flows, public health problems, humanitarian relief, war crimes prevention, climate change, and human and wildlife trafficking.”

Encouraged by DeVivo, Flier secured an internship with the World Affairs Council of West Michigan, a nonprofit organization focused on foreign policy and issues of international interest. She also delved into independent research. Her presentation, examining the impact of evangelical Christianity on Grand Rapids politics, won first place in the undergraduate student paper competition at the annual meeting of the East Lakes Division of the American Association of Geographers. She was to present her research at the California Geographical Society conference in April before that event was canceled because of the pandemic.

Her position as president of GRCC’s chapter of Gamma Theta Upsilon, the international geographical honor society, has helped her pursue her passion for social justice — locally and globally. In addition to raising funds for Kids’ Food Basket, GTU is also focused on helping CAMFED, the nonprofit Campaign for Female Education, with its mission of educating and empowering young women in sub-Saharan Africa.

Flier, who graduated this spring with an Associate of Arts, plans to start at Aquinas College next fall, with a double major in geography and community leadership.

“My plan is to work in some capacity in the nonprofit sector here in Grand Rapids, doing something related to community development,” said Flier, who received Aquinas’ Hruby Scholarship and one of only two Darrel Hess Community College Transfer Scholarships awarded nationally from the American Association of Geographers.

Flier, who also works as an academic tutor, believes students should approach general education requirements with an open mind.

“If you’re the least bit unsure of the educational path you want to take, just take as many different classes as you can — you never know what you might end up falling in love with!”