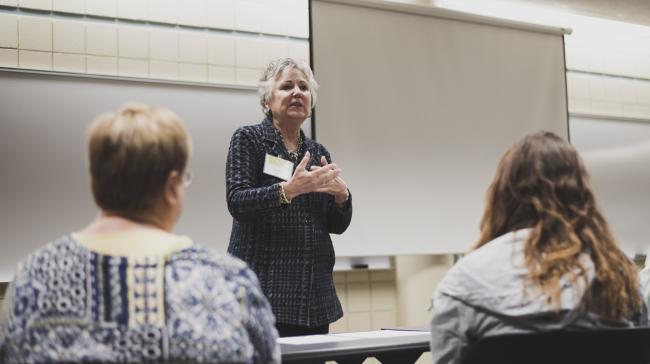 June 11, 2020 GRAND RAPIDS, Mich. -- The Grand Rapids Community College Foundation is working to continue the legacy of the late Deb Bailey by endowing a scholarship in her name.

Bailey, who served on Grand Rapids Community College’s board of trustees from 2013 until she passed away in April, was known for putting the needs of students first. A scholarship is the perfect way to remember her contributions to GRCC, said Dr. Kathryn Mullins, vice president of College Advancement and executive director of the GRCC Foundation.

“Deb touched countless lives across West Michigan,” Mullins said. “She devoted her time and talents to many organizations, most of them focusing on supporting people who needed it the most. She was an inspiration. Endowing a scholarship in her name is one way to continue her legacy, and support generations of GRCC students to come.”

Bailey attended GRCC before transferring to Western Michigan University, where she earned a bachelor’s degree in English, communications and education. She earned master’s degrees in counseling from WMU and in management from Aquinas College. She rose to the ranks to become director of corporate relations for Steelcase Inc.

She received a number of awards, including the YWCA Tribute Award for Community Service, the Grand Rapids Chamber of Commerce Athena Award, and Aquinas’ Outstanding Alumni Award. She was also named one of the 25 Most Influential Women in West Michigan by the Grand Rapids Business Journal.

At the time of her passing, Bailey was the GRCC board’s vice chairperson and served as a co-chair of the GRCC Foundation’s successful “A Broader Vision” campaign in 2019.

Community members can donate to the new scholarship through the foundation’s online donation page: grcc.edu/donate. Select "Deb Bailey Memorial Scholarship” from the drop-down menu under "Designation.”