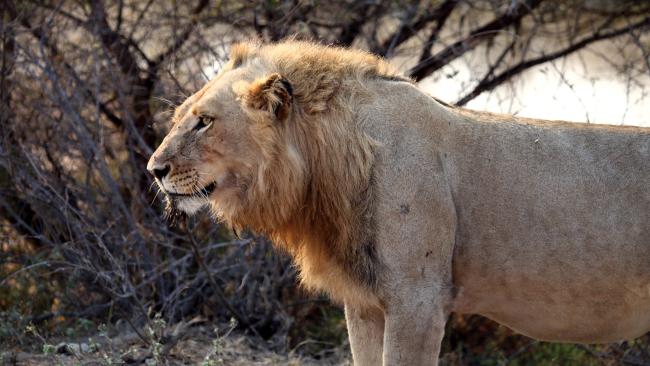 Jan. 19, 2023, GRAND RAPIDS, Mich. -- GRCC geography professor Mike DeVivo ends emails he sends with “Geography Lives!” Since his surname is a patronymic of Vivo, or “alive,” DeVivo comes by his sign-off honestly.

He’s doing his best every day to bring geography to life for his GRCC students, having served as a faculty member at the college since 2002. He loves the classroom, but he also loves opening up the world of geography beyond the classroom, including hosting a Conversation with a Geographer oral history series.

And in recent years, he has given a number of talks on leadership, as well as the history of geography, geopolitics, and African wildlife conservation and community development before academic audiences, corporate executives and government officials in Africa, Asia and the United States.

One of the places his passions come together is in an annual calendar project that raises funds for CAMFED, an international NGO and nonprofit that works to eradicate poverty in Africa via the education and empowerment of girls and young women.

The GRCC connection to CAMFED goes back more than a dozen years to when DeVivo incorporated “Half the Sky: Turning Oppression into Opportunity for Women Worldwide,” written by Nick Kristof and Cheryl WuDun, into his World Regional Geography course.

“To say that it was impactful is an understatement,” he recalled.

Kristof then was invited to speak on the GRCC campus as part of the Diversity Lecture Series, and he was pleasantly surprised to be awarded honorary membership to the International Geographical Honor Society for contributing to the advancement of geography during his visit.

DeVivo declared: “His presence on campus and our knowledge of Half the Sky’s content sparked us to put our heads together to develop a project to ‘make a difference.’”

Support for CAMFED was the result, and DeVivo decided to take the photos of animals he had from fieldwork in Africa to produce a benefit calendar and, he added, “spotlight the GRCC geography program’s initiatives associated with advancing social justice vis-à-vis race, ethnicity and gender.”

The first calendar was produced in 2012 for 2013, and one has been produced every year since. The amount raised for CAMFED varies, but many years it’s more than enough to make a difference for girls and young women in Africa.

“It's important to place this effort in context,” DeVivo said. “Given that the funds needed to support the education of a high school girl in Africa for a year amounts to about $240, my students and I determined that this is one small way we could make a difference. As far as fundraising goes, in some years, it's only enough to send a few girls to school. Yet three or four years ago, our T-shirt and calendar sales played a big role in a $4,800 check being sent to CAMFED. Supporting the education of 20 girls goes a long way in fostering women's empowerment for a better world.”

The current “Faces of African Wildlife” calendar has been selling well for the past few weeks and can still be purchased from DeVivo via the contact info on his website. This year’s version includes images of cheetahs, meerkats, giraffes, lions, hippopotamuses, African buffaloes, and other animals photographed by DeVivo in 2021 and 2022. It is designed by the GRCC Communications graphic design team.

DeVivo said the wildlife calendar is only one aspect of the excellence of the GRCC geography program.

“Students and faculty often deliver lectures at academic conferences and universities in the U.S. and abroad,” he noted.  That includes his own travels which since September 2022 have seen him give talks at the University of Pretoria (South Africa), Western Washington University and Muskegon Community College.

“And I’m planning to speak at conferences in Denver, Los Angeles and Mozambique before the end of May,” he added with a smile.

Indeed, the GRCC geography program has been recognized by the American Association of Geographers as one of the top community college geography programs in the country, and DeVivo has been asked to serve on AAG committees to advance the discipline, including currently serving as the chair of the Meridian Award Committee which determines the most important book written by a geographer in 2022.

“Former students have shown themselves to be stellar undergraduate and graduate students, as well as scholars,” he said. “Upon reflection, it is the GRCC geography students I have mentored over the years who in many ways are sources of inspiration for continuing on this path.”

DeVivo describes his own educational path as “rather complex.”

He was born in Europe and spent considerable time there before attending school in Connecticut.

“When I was 17, my parents reluctantly agreed to sign the necessary documents for me to enlist in the U.S. Marine Corps,” he said.

He then served as a Recon Marine before taking an interservice transfer to serve as a U.S. Navy Diver, and following honorable discharges, he attended a couple of colleges and universities and also was licensed as a U.S. Merchant Marine Officer, taking command of various vessels for the mineral and oil industry.

Now, for the past two decades he has called GRCC home, a place where geography lives.

This story was written by Phil de Haan.