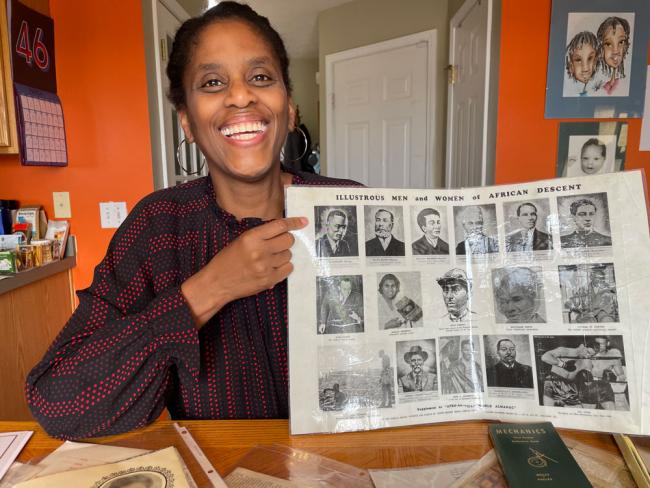 A School news Network feature -- English professor Mursalata Muhammad is building a collection of documents and artifacts from the life of her grandfather, working to honor his legacy and recognize the contributions he made as a Black inventor.

While Muhammad’s project, which she’s named The Claude Harvard Project, is personal, she plans to use it in her English classes to show the value of doing primary research.

“I can say, ‘I did this work,’” she said of how she plans to create personal connections to research with her students. “Now I have such a rich appreciation for it.”

Muhammad’s grandfather, Claude Harvard, invented more than 25 items at Ford Motor Company in Detroit, but he’s still not credited for all of his work. She’s working to change that by building awareness and finding as many resources as she can to link Harvard to his work.

“The biggest part (of the project) is to trace and figure out which inventions should have his name on them,” said Muhammad, who has taught at GRCC for 20 years.

One of Harvard’s first inventions was the automated piston pin measuring machine, which used radio waves to check, shape and sort piston pins by size. As an example of the prejudice he faced, an advertisement for the machine first featured Harvard but later was changed to replace him with a white man.

Muhammad has worked with the U.S. Patent and Trademark Office and is looking into the time period when Harvard worked at Ford in the 1930s. She explores archives for clues to his inventions, including documents with his handwriting on them.

She also has created presentations on Harvard with historian David L. Head, including a three-part virtual series with the Detroit Public Library. The second in the series, Discovering Claude Harvard: In His Own Words, will air on Saturday, April 17, with registration available online.

Muhammad has also started a Change.org petition, encouraging Ford Motor Company to recognize Harvard’s work. “His contributions have been overlooked for decades and are an example of the many unnecessary gaps in American history,” the petition states.

Muhammad learned much of her paternal grandfather’s history from stories he and family members shared. Though she didn’t meet Harvard until she was 9 or 10 years old, he was influential in Muhammad’s life from that time on. A dedicated student, he helped support her throughout her education and until his death in 1999.

Harvard was born to tenant farmers in 1911 in Dublin, Georgia, bearing the surname of former plantation slave owners. His innovative mind was at work from an early age and he was always persistent when working toward a goal.

As a teenager, Harvard talked his way into attending Henry Ford Trade School in Dearborn, though Muhammad said he faced discrimination for being Black and had to promise school leaders he would not cause trouble. The school trained boys in a variety of skilled, industrial trade work, including machining, metallurgy, drafting and engine design. (A video of Harvard talking about becoming president of the school’s Radio Club, which led to him meeting Henry Ford, is available on YouTube.)

After playing catch-up to meet the academic level of his peers, Harvard excelled. He began taking night classes at Cass Tech in Detroit, and was the first student to pass a test to receive radio call letters from the Federal Radio Commission for the school.

Harvard graduated at the top of his class in 1932, but was the only student who didn’t receive a journeyman’s tool-and-die maker’s card to signify his status as a skilled tradesman. Although he applied for it several times, his card never came, Muhammad said.

Despite this, Harvard was hired by Ford Motor Company. Along with his many inventions, his time at the company included facilitating a meeting between Henry Ford and George Washington Carver. He also represented his piston pin inspection machine at the 1934 World’s Fair, despite racial practices that initially kept him from attending.

Muhammad plans to use her personal research work to craft curriculum for English 102 and GRCC’s writing pre-major, which prepares student to transfer into a bachelor’s degree program in writing.

Research can be tedious, she said, and she hopes to show the importance of having a genuine interest in subjects.

“I teach research from a personal perspective,” she said. “If you have to do research, the best way I know to get through it is to have some sort of hook that you are interested in.”

Muhammad also plans to use her research to create curriculum that could be used in all grade levels. It would include a traveling exhibit, virtual presentations and a book collaboration.

Former GRCC student Azizi Jasper, now a social worker in Detroit, said Muhammad was one of his favorite professors at GRCC. He remembers watching one of Muhammad’s presentations on Harvard during a class and said her project is a great resource for students.

“Whenever you are instructing a class and teaching a subject, it’s beneficial to have a personal connection and feel inspired about it,” he said. “What better place to start than with family?”

Muhammad’s ability to make personal connections is present in all aspects of her teaching, Jasper said.

“She adjusts to student learning styles in a way that is beneficial to everyone,” he said. “She met the students where they were and built up from there.”

Jasper, a spoken word poet and co-founder of The Diatribe, will be a guest presenter during a Zoom class for her creative writing class. He is one of several authors to present in Muhammad’s class this year.

“She is an amazing professor and has maintained a relationship with me, even after her tenure as my professor. I can call her about anything,” he said. Muhammad and her husband, Will Smith, also started The Bragg-Harvard-Muhammad Smith Why We Can’t Wait Scholarship Fund, which provides $3,000 in partial scholarships annually, in 2009 in memory of Harvard and other family members.