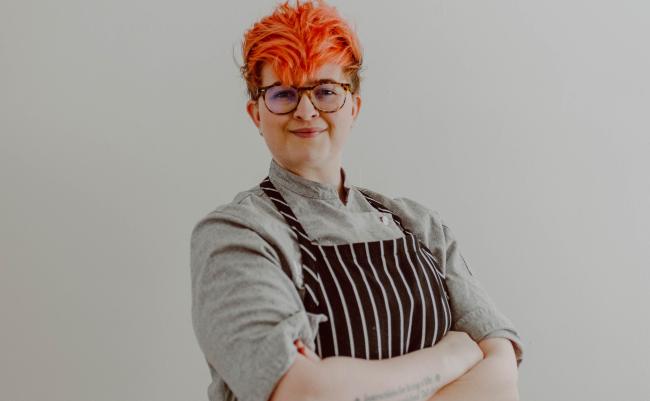 “I was planning on going to college originally for some sort of art degree,” she recalled recently. “But I didn’t know exactly what I might want to do with that degree.”

“It was the perfect fit,” Baas said. “Really baking and pastry have allowed me to have a solid career that I think lets me be just as artistic as traditional art.”

After attending GRCC from 2016 to 2019, and earning an associate degree in Culinary Arts, Baas went on to complete the joint program in Hospitality Management with Ferris State University.

She now works parttime for Gun Lake Casino and owns her own business, called Equinox Pastries and Pops. And after five-plus years in the hospitality industry, she said she still loves the pace and variety of her work.

“At Gun Lake, we have quite a bit of freedom and flexibility because of our pastry chef, so that’s great,” she said. “And we make desserts for all five restaurants that are part of the casino, so there’s a lot of variety there. But then I also have my own business. That not only lets me get really creative, but it’s also what I someday want to do on a fulltime basis.”

Baas credits GRCC professor Audrey Heckwolf for not only helping her grow from a baking and pastry perspective but also for instilling in her a confidence that she could one day own her own business.

“I took retail baking with her,” Baas said. “That course is a lot more than just creating baked good for a store. There is a lot of research and development that is part of it, thinking about mass production, being business minded. The course, and Chef Audrey, helped me get that motivation to someday be a business owner. I can’t thank her, and many of my other professors, enough.”

One of those professors, Laura Woolsey, has a doctorate in Astronomy and Astrophysics from Harvard and indirectly helped Baas name her business.

“It’s a funny story actually,” Baas said with a smile. “I was in Woolsey’s astronomy class trying to figure out how to connect the word equinox to baked goods since I liked the sound of Equinox Pastries. My professor was walking around the room, talking about how the seasons worked, with a plastic ball model of the earth with a metal axis down the middle, and it clicked. It was a circle, with a stick in it, and I could make that: cake pops. So, I doodled the logo with the "O" in Equinox as a cake pop and the rest was history.”

Now, with Equinox Pastries and Pops, Rachel creates custom desserts for people's celebrations, teaches cookie and cake pop decorating classes and also owns a vintage camper that she renovated to become a fun mobile dessert bar for markets and events.

“I absolutely love creating people's dessert visions into delicious realities while also being able to use my business and work as a creative outlet,” she said with a big smile.

She prepares her products out of licensed kitchen in Eastown in Grand Rapids, renting space by the hour as needed. And while she likes the arrangement, she said her GRCC education taught her never to settle, so she has her sights set higher.

“Last year I did a farmer’s market every week,” she said. “And one of my goals in 2023 is to get into more retail settings. If I’m able to do that, then the next step would be to have my own kitchen. It would be a big, big step, but I want to dream big.”