Established in 2006 as the Diversity Learning Center, the Bob and Aleicia Woodrick Center for Equity and Inclusion provides a structural space for the ODEI unit and GRCC stakeholders. In this space, GRCC and surrounding communities are provided with the opportunity to experience cultural competence through community partnerships, academic colloquium, youth conferences, student engagement initiatives, and programming that advances responsive social justice. 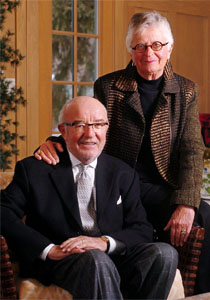 “I believe that racism is real and that it is wrong – and that its presence with us has not diminished. Furthermore, I believe our denial plays a significant role in masking racism. Only when we acknowledge our denial can the healing of racism begin.” ~Bob Woodrick, “Racism Lives Through Denial.” Grand Rapids Press, Jan. 14, 1996, p. E1

Robert (Bob) and Aleicia Woodrick are a couple who get things done in the greater Grand Rapids community. Bob's passion and relentless work in combating racism has forever changed how racism is viewed in West Michigan. Aleicia’s activism and philanthropy, particularly as it relates to women, children and families and the violence, poverty and discrimination affecting them, has earned her state-wide recognition for her efforts. Both are long-time advocates of diversity and have used their resources to support numerous causes on behalf of racial justice and diversity in West Michigan

As a youth, Bob began his career in the family business D&W Food Centers Inc., (D&W) in Grand Rapids and worked there his entire life except for his years in college and the military. He worked in many capacities including President and CEO and Chairman of the Board. Bob earned his undergraduate degree at Michigan State University. In 1996, Aquinas College conferred upon Bob a Doctor of Humanities honoris causa, citing his work as, "…more than an inspiration, it is a blueprint for others to follow…"

Aleicia was born and raised in Grand Rapids. She graduated from the legendary South High School and Grand Rapids Community College. As one of the original board members of Grand Rapids Opportunities for Women (GROW), Aleicia played an integral role in broadening GROW’s recognition as a program that assists women in starting their own businesses. Aleicia has served on the boards of many organizations including Michigan Special Olympics, Michigan Women’s Foundation, Grand Rapids Art Museum, Grand Rapids Children’s Museum, Downtown Management Board, and the DDA of Cascade.

Bob has consistently raised the issue of racism in whatever forum he finds himself; He has spoken to numerous civic leaders as well as the Economic Club about the business case for diversity in hiring and customer service.

As a result of Bob's advocacy, the Grand Rapids Area Chamber of Commerce piloted the Institute for Healing Racism for area business people. In 1999, the Woodricks collaborated with Aquinas College to establish and house the Woodrick Institute for the Study of Racism and Diversity. In 2016, through an endowment by the Woodrick family the Bob and Aleicia Woodrick Center for Equity and Inclusion was established at Grand Rapids Community College.