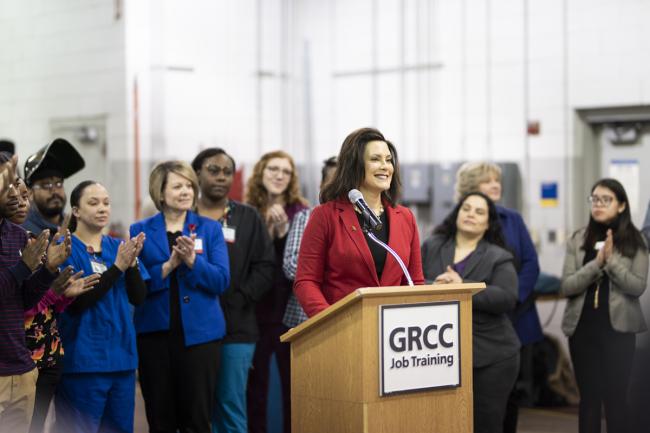 The tour was Whitmer’s first visit to a community college since she became governor, and came the day after her first State of the State address, where she recognized the vital role that community colleges play in providing opportunities for credits for degrees or to transfer to four-year institutions and specialized training for in-demand jobs for people of all ages.

Whitmer met with GRCC President Bill Pink, several recent graduates of GRCC Workforce Training programs, and education and employer partners to hear about how the college works to be relevant and responsive to the people and community it serves. She also tried one of GRCC’s virtual welding instruction machines.

The governor said many of the jobs going unfilled in Michigan require postsecondary training, including degrees or certifications, and many people already in the workforce will need to gain additional skills to advance.

She set a goal of increasing the number of Michiganders with postsecondary credentials from 44 percent to 60 percent by 2030.

“There is a path for everyone in this state, and if you are willing to work, you can make a really good life in Michigan,” Whitmer said in remarks after her tour. “I want to thank you, Dr. Pink, for the really warm welcome, and everyone here for spending some time with me today and to highlight what is happening here at GRCC -- and for inspiring me to keep my foot on the gas and make sure everyone gets an opportunity in our state.”

Prior to the tour, Whitmer met with Cholonni Madison, who recently graduated from GRCC’s Public Works Academy and now works for the city of Grand Rapids, and Jamie Sheppard, a graduate of the Medical Assistant Registered Apprenticeship Program who now works at Cherry Health.

“We are honored Gov. Whitmer made GRCC her first community college visit, and that we were able to show her how West Michigan educators and employers work closely together to provide access to a great education,” Pink said. “The governor affirmed the importance of lifelong learning and the particular role that GRCC plays.”

GRCC’s Medical Assistant Apprenticeship program is the first in the nation to be accredited by the Commission on Accreditation of Allied Health Education Programs. GRCC, the U.S. Department of Labor’s Office of Apprenticeship, West Michigan Works!, Mercy Health, Cherry Health, Spectrum Health, Montcalm Community College and Muskegon Community College worked together to launch the program in January 2016.

The college has more than 600 students in apprenticeship programs, where they gain on-the-job training while earning an associate degree without accumulating debt.

GRCC created its seven-week Public Works Academy last year with the help of local municipalities to help them fill in-demand jobs. The first group of 10 students graduated last summer. The program is a result of a $1 million grant from the W.K. Kellogg Foundation.

GRCC’s noncredit workforce programs generate hundreds of millions of dollars for the West Michigan economy, according to a recent analysis focusing on the impact created by alumni income, companies attracted and expanded by training programs, and grant spending.