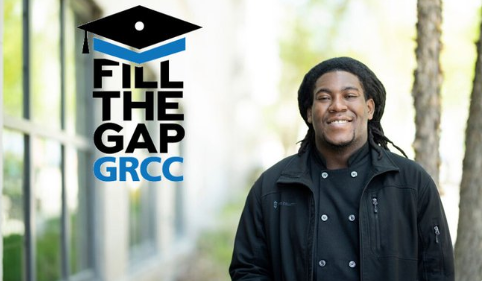 March 19, 2021, GRAND RAPIDS, Mich. -- The GRCC Communications Team was honored by a national college communications and marketing organization for a campaign encouraging students considering taking a gap year due to the pandemic to instead take classes at GRCC.

The “Fill the Gap” campaign earned first place in the Paragon Awards from the National Council for Marketing and Public Relations in the Successful Recruitment or Marketing Program category. The awards were presented during a virtual ceremony on Wednesday.

The campaign included a series of 20 social media posts running in May and June, supported by information on the GRCC website.

“Your objectives are spot-on,” judges wrote. “Great idea to try to combat the gap year and communicate the affordability factor. Awesome diversity representation.”

The campaign featured portraits of GRCC students, considered reasons why a student would contemplate a gap year, and countered every one with an example of why a community college would be a better option for them. It shared the educational and financial benefits of gaining transferrable credits at GRCC rather than taking a year off.

The Paragons are a national award. GRCC in October earned eight regional awards from NCMPR’s District 3, which includes community, technical and junior colleges in Illinois, Indiana, Michigan, Ohio, Wisconsin and the Canadian province of Ontario.

The district awards included a Gold Medallion for the GRCC Foundation’s 2018-2019 Annual Report, which focused on telling the stories of GRCC’s best ambassadors – its students, alumni and community members – and sharing how scholarships can lower financial obstacles and help many students gain a life-changing education.